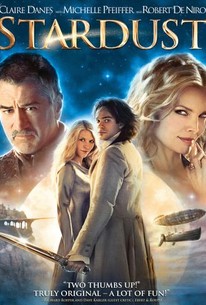 Critics Consensus: A faithful interpretation that captures the spirit of whimsy, action, and off-kilter humor of Neil Gaiman, Stardust juggles multiple genres and tones to create a fantastical experience.

Critics Consensus: A faithful interpretation that captures the spirit of whimsy, action, and off-kilter humor of Neil Gaiman, Stardust juggles multiple genres and tones to create a fantastical experience.

Critic Consensus: A faithful interpretation that captures the spirit of whimsy, action, and off-kilter humor of Neil Gaiman, Stardust juggles multiple genres and tones to create a fantastical experience.

The sleepy English village of Wall is so named for the cobblestone wall that has, for eons, kept the villagers safely apart form the supernatural parallel universe that lies just on the other side. It is here that young Tristan Thorne makes a wild-eyed promise to the prettiest girl in the village, whose heart he hopes to win: that he will bring her back a fallen star. Now, in order to make good on his promise, Tristan will have to cross the forbidden wall, and enter a mysterious kingdom lit by unending magic and unfolding legends. In this fantastical realm known as Stormhold, Tristan discovers that the fallen star is not at all what he expected but a spirited young woman injured by her cosmic tumble. Now, she is in terrible danger--sought after by colossal powers including the King's scheming sons for whom only she can secure the throne; and a chillingly powerful witch desperate to use the star to achieve eternal youth and beauty. As Tristan sets out to protect the star and bring her back to his beloved on the other side of the wall, he encounters with a pirate captain and a shady trader, among other surprises. But if he can survive, Tristan will also uncover the secret key to his own identity and a fate beyond his wildest dreams.

Ricky Gervais
as Ferdy the Fence

Peter O'Toole
as The King

This is utterly formulaic. True, there are a few jokes, but as they are all extraordinarily lame, this can't be called a send-up.

Like the star that falls to Earth near the beginning of the movie, Stardust is glittery and pretty and possesses its own pleasing-enough personality, but it won't set the world on fire.

Despite its faults, Stardust should at least be accounted a partial success - and certainly more than a failure.

There's a shameless romantic streak here, quite welcome in a boy-targeted genre that usually insists battles are cool and love is for wimps.

A wackily surreal, primary-coloured fairytale from a graphic novel by Neil Gaiman.

Crossing it is prohibited as it leads to a magical realm where nothing is to be believed and no-one is to be trusted. Such a charming fantasy love story with an incredible cast and this banger of a theme song.

Brings an emphatically welcome revisit to the science-fiction-infused fantasy subgenre.

Stardust is a movie for people who like comedy, sword fights, unlikely friends, transformations, personal discovery and above all, love.

Whimsical, fantastic, and mythical only in the way Neil Gaiman can write it. This adaptation from his book of the same name is perfectly fun and romantic. It's a mix between "The Princess Bride" and "Ella Enchanted," a film that evokes childhood fairytales as well as the adult nature of the original Grimm's Fairytales. There's every number of characters, including witches, sky pirates, warring princes, and a fallen star turned beautiful young woman. With stunning visuals, catty humor, and a lovable romantic pair this is a must-see film for all ages. The main problems I had with the film was the strange, slightly homophobic humor of Robert De Niro cross-dressing and putting on a "sissy" voice, and the complexity of the plot, which could have been better condensed for the film adaptation. Otherwise this was a fun, magical journey.

Just watched this again for the 5000th time this time on blu ray and it again is just an amazingly fun movie!! Directed my Matthew Vaughn (Kick-Ass), it is one of my all time favorites. What do stars do? They shine and the stars of this movie do from Robert De Niro to Michelle Pfeiffer. All around great movie!!