Stargate: The Ark of Truth2008 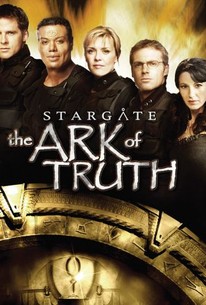 Stargate: The Ark of Truth Photos

The irrepressible Stargate team faces their biggest challenge yet as they set out in search of the ancient artifact with the power to defeat the villainous Ori before they launch a devastating attack on planet Earth. The Ori are determined to exterminate all traces of mankind, but not if Daniel Jackson (Michael Shanks), Teals (Christopher Judge), Vala (Claudia Black), Sam (Amanda Tapping), and Cam (Ben Browder) have anything to say about it. With a scheming I.O. operative aboard the Odyssey, the final fight for humanity begins to unfold in the deepest reaches of outer space. Beau Bridges co-stars.

Critic Reviews for Stargate: The Ark of Truth

While it's been a long time since I trashed the original Stargate movie, I must say that this latest incarnation leaves me about equally cold.

The movie is clearly a solid attempt to wrap up the SG-1 series.

There's less humor and less character stuff than I'd like... But, you know: it's SG-1.

Where the heck is MacGyver?

Audience Reviews for Stargate: The Ark of Truth

Honestly I was never a Stargate Fan. Wether the TV Series nor the Movies. I quit watching The Ark of Truth after about 30 minutes. I think it was a nice idea and all but I personally dont enjoy Stargate trilogy. The Only one I liked was the Original one with James Spader.

Stargate SG-1 may be a defunct television series, but its legacy lives on in Stargate: The Ark of Truth. This adventure is the first film after the ending of the series and it provides a nice continuation to where the series left off.

The story isn't as complex as the TV series and that is a little bit of a disappointment. It does bring some nice closure to some elements while still leaving others open for future installments.

The story may be lacking, but the action sure isn't. There is a lot going on action wise and that makes the hour 40 minute picture fly by. The CG is great as usual and the same can be said about the sound effects.

All the major actors return to reprise their roles. Unfortunately, Don Davis and Richard Dean Anderson don't show up. The return of Morena Baccarin is candy for the eyes.

This is a must see for Stargate SG-1 fans. For others, I recommend checking out some of the series first.

A solid continuation of the Stargate mythos. Hard to follow if not a fan of the show though.

This was a really good ending to the series. When the show ended it left the main story line up in the air and this flick gives us the wrap up. It really should have been done as the series finale. All the actors are back and they are at the top of the game as they fight the enemy. The effects are good but nothing we haven't already seen in the series already.

Stargate: The Ark of Truth Quotes