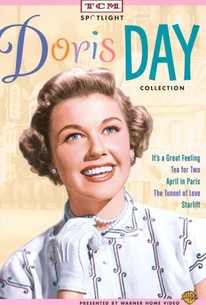 Starlift was Warner Bros' attempt to revive the "all-star patriotic musical" format which had worked so well during WW II. The wisp of a plot concerns Mike Nolan (Dick Wesson) and Rick Williams (Ron Hagherty), San Francisco-based airmen who serve as crew members on a shuttle to Korea. To impress a group of movie starlets making a personal appearance, Mike and Rick claim that they're due to be sent into combat. Actress Nell Wayne (Janice Rule) falls in love with Rick, leading to a major publicity blitz and culminating with a special USO presentation for all the Korea-bound servicemen in Frisco, starring virtually everyone on the Warners' contract roster. Among the stars making personal appearances (and sometimes delivering songs, whether they can sing or not!) include Gordon MacRae, James Cagney, Ruth Roman, Doris Day, Gary Cooper, Frank Lovejoy, Phil Harris, Randolph Scott and Jane Wyman. Reportedly, the comedy team of Tommy Noonan and Peter Marshall made its movie debut in Starlift, though they don't appear in the currently available prints. ~ Hal Erickson, Rovi

Doris Day
as Herself

Gordon MacRae
as Himself

Gene Nelson
as Himself

Ruth Roman
as Herself

Virginia Mayo
as Herself

Jack Larson
as Will

William Hunt
as Boy with Cane

Walter A. Brennan, Jr.
as Driver

Steve Gregory
as Boy with Camera

Joe Recht
as Soldiers in Bed

Herb Latimer
as Soldiers in Bed

Ezelle Poule
as Waitress
View All

It might be little more than Hollywood ridiculously selling itself, but it's a heck of a show.

There are no featured reviews for Starlift at this time.