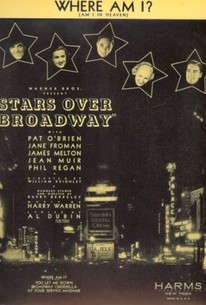 This musical chronicles the rise to stardom of a humble bellhop after he is discovered by a talent agent. Though he becomes a very popular singer of contemporary songs, the young man really aspires to a career in opera. At first his manager is appalled and refuses to let him, but when his disconsolate star begins hitting the sauce, he relents and success ensues. Songs and production numbers include "Broadway Cinderella," "Where Am I?," "At Your Service Madam," "You Let Me Down," "Over Yonder Moon," "September in the Rain" (Al Dubin, Harry Warren), "Carry Me Back to the Lone Prairie" (Carson J. Robison), and selections from "Aida" (Giuseppe Verdi), and "Martha" (Friedrich von Flotow). ~ Sandra Brennan, Rovi

Lillian Worth
as Buxom Singer

Pat C. Flick
as The Greek
View All

Critic Reviews for Stars over Broadway

Really one can't stand it. [Full review in Spanish]

Another picture about singers along Broadway and their troubles, both professional and private. It's been told too often now to offer many surprises.

There are no featured reviews for Stars over Broadway at this time.