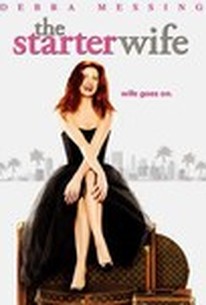 Based on the 2005 bestselling novel by Gigi Levangie Grazer, the six-part miniseries The Starter Wife starred former Will & Grace leading lady Debra Messing as Molly Kagan, an archetypal "Hollywood wife" who for ten years had enjoyed the perks and privileges of being married to powerful studio executive Kenny Kagan (Peter Jacobson). All of this changed drastically when Kenny dumped his spouse for a much-younger pop singer named Shoshanna (Trilby Glover), adding insult to injury by informing Molly that their marriage was through via cell-phone. Having carefully timed the breakup to coincide with the expiration of the couple's pre-nuptual agreement, Kenny was able to escape without providing Molly with a huge monetary settlement, leaving our benumbed heroine high and dry. Also, Molly was now "persona non grata" in her Brentwood community, with many old doors (especially those on stores and restaurants) being literally closed in her face, and such fair-weather friends as Cricket Stewart (Miranda Otto) and Joan McAllister (wonderfully played as a self-hating lush by Judy Lewis) conspicuously unavailable. Vowing to start life anew for the sake of herself and her teenaged daughter, Molly relocated to Malibu, where she found a new best friend in the form of airheaded Malibu gate guard Lavender Caraway (Arika Noni Rose). She also entered into a brace of tempestuous relationships with aging, moody movie producer Lou Manahan (Joe Mantegna) and handsome but untrustworthy beachcomber Sam Knight (Stephen Moyer). All of the episodes were scripted by Josann McGibbon and Sara Parriott and directed by Jon Avnet--and curiously, all were filmed in Australia rather than "La-la Land". Making its USA Network debut on May 31, 2007 with a two-hour episode, The Starter Wife ran on a weekly, hourly basis until June 28 of that year. ~ Hal Erickson, Rovi

Critic Reviews for The Starter Wife

There are no critic reviews yet for The Starter Wife. Keep checking Rotten Tomatoes for updates!

Audience Reviews for The Starter Wife

This was a good enough miniseries to watch all the way through but OMG! Could they stretch the simple plot any longer. Some actors were quite good, others just boring eye candy.