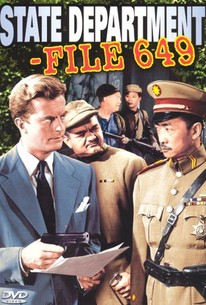 Those scurrilous Chinese communists are up to their old tricks in the 1949 flagwaver State Department - File 649. William Lundigan plays Ken, an operative of the U.S. Foreign Service stationed in North China. Ken is one of several people trapped in a remote village by evil warlord Yun Usu (Richard Loo), who intends to sell his services to the highest bidder, be they Red or otherwise. Our hero manages to get a message out to the Free World before the film's operatically self-sacrificial climax. The characterizations are of the cardboard variety and the dialogue is straight out of Fu Manchu. Still, State Department - File 649 is a fascinating encapsulation of postwar political propaganda.

John Halloran
as Examining Board Member

Margo Woode
as Carrie
View All

There are no critic reviews yet for State Department---File 649. Keep checking Rotten Tomatoes for updates!

There are no featured reviews for State Department---File 649 at this time.