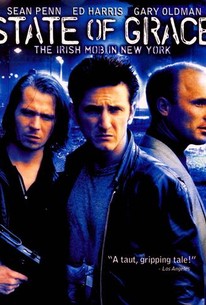 This directorial effort from Phil Joanou stars Sean Penn as an Irish-American undercover cop working the Hell's Kitchen beat. Penn is ostensibly on a sentimental journey to his old neighborhood. Actually he's been assigned to infiltrate a criminal gang led by Ed Harris, the brother of Sean's best friend Gary Oldman. Penn suffers the requisite honor vs. duty anguish when he renews his childhood romance with Harris' sister Robin Wright. State of Grace would have had more clout had it been more clear as to time and place: it's supposedly set in the 1990s, but the attitudes and behavior are pure 1970s.

John A. MacKay
as Raferty

News & Interviews for State of Grace

View All State of Grace News

Critic Reviews for State of Grace

Every indulgence, including a two hour and 14 minute running time, is on display.

A hugely impressive piece of work for a young director previously known for his documentary U2 Rattle and Hum.

Mr. Oldman gives an electrifying performance that both establishes a tragic, terrifying character and explains why that character's world is such a perilous place.

Penn's affecting performance, a strong and silent struggle with his warring emotions, is hard pressed to offset Oldman's shrill shenanigans.

What's best about "State of Grace" is what's unique to it - the twisted vision of the Oldman character, who lives in a world of evil and betrayal and has somehow thought himself around to the notion that he is doing the right thing.

Joanou is no Scorsese but he successfully builds a satisfying crime flick around Oldman's electrifying performance.

It's (mob) business as usual, elevated by some deft plotting and sharp dialogue from scripter Dennis McIntyre and forceful turns by all the principals, particularly Gary Oldman as a twitchy live wire who's fiercely loyal to friends and family.

A violent, tortuous melodrama that labors mightily to be an Irish Mean Streets or a latter-day Wild Bunch.

Superior gangland drama with a nod to Scorsese

A gritty, intense and explosive Irish gangster drama that's second only to Scorsese's GoodFellas as the best film of 1990.

Charts the territory of lawlessness, betrayal and violence.

Audience Reviews for State of Grace

Stellar cast. I was captivated the whole film by the actors. Although I have liked other 'rat in the mob' movies better, like Donnie Brasco and Departed, but with Oldman, Reilly, and Harris I can't complain. I gotta say, the one thing keeping me from a higher rating is that I didn't care too much for the ending. As epic as the slow motion shootout was, it couldn't have felt more anti-climatic. Although, it was some nice squiby action.

Irish Mob movies are not so common, but always seem to be great when they're made. This is one of the best, certainly topping The Depearted in my opinion. It deals with a similar scenario, but it's a lot more human and better looking. The cast is flawless, Sean Penn and Gary Oldman are just a few of the people who give some of their best performances. The story, for its time, was extremely original and done in such an effective way. It's a shame that no one holds this in the same regard as Goodfellas because it's honestly just as good. You care about these characters and believe they could exist in the real world. The Hell's Kitchen atmosphere is really effective, you can practically see the scummy darkness around you. Phil Joanou might not have many hits, but this is good enough to earn him some respect in my book.

Magnificent look at the Irish mob in New York known as the Westies. Gary Oldman's character work as the ruthless Jackie Flannery is brilliant. He makes Jackie vulnerable and likable, showing he is one of the most unsung actors of our time. Sean Penn and Ed Harris turn in outstanding performances as well in this riveting film set primarily in New York City's "Hell's Kitchen". Even though Oldman's performance alone makes this film a "must see", the film is pretty much a perfect piece of cinema in every way. Very likely the best film of the last twenty years.

A raw, gritty, and brutal look at the Irish mob. Superb filmmaking. Strong, powerful, and solid performances...this is an excellent gangster film. "Terry Noonan returns home to New York's Hells Kitchen after a ten year absence. He soon hooks up with childhood pal Jackie who is involved in the Irish mob run by his brother Frankie. Terry also rekindles an old flame with Jackie's sister Kathleen. Soon, however, Terry is torn between his loyalty to his friends and his loyalties to others." Although each performance is almost flawless, Gary Oldman's stands out the most. What a maniac he is. A maniacal madman that's a ticking time bomb just waiting to erupt. His character is someone you definitely wouldn't want to bump into while walking down the street. Ed Harris plays his character good as well. He's truly convincing and certainly knows how to make the audience learn to hate his fu**ing guts. Sean Penn is another one who makes a solid performance. Everyone here is just great. We even got John Turturro and John C. Reilly making an appearance. A powerhouse of a film. It's also very violent, but nothing you wouldn't be able to stomach. State of Grace is hands down one of my favorite gangster movies, right up there with Goodfellas and Casino. A must see for everyone!