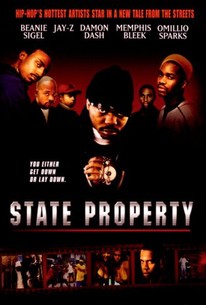 One man's efforts to get ahead on the streets lead him into a life of danger in this hard-hitting urban drama from Roc-A-Fella Films, the production company run by top hip-hop artist Jay-Z. Beans (Beanie Sigel) is a member of a Philadelphia street gang who has had enough of his life of poverty. Determined to get ahead by any means available to him, Beans steps to the wrong side of the law and begins selling drugs. Forming a crew with his friends and fellow gangsters called the ABM ("All 'Bout the Money"), Beans and his partners soon become the new rulers of Philly's underground economy. But with success comes competition, and Untouchable J (Jay-Z) and Dame (Damon Dash), the leaders of an establish drug-dealing crew, decide the ABM are taking more than their share of the business, and begin retaliating with violence -- with both the ABM crew and Beans' wife as targets. State Property also stars Memphis Bleek, Omillio Sparks, and Sundy Carter.

Pain In Da Ass
as Mario

J. Diamond
as Medic No.1

Frank Minerva
as Medic No.2

Oschino
as D-Nice
View All

A film of empty, fetishistic violence in which murder is casual and fun.

Basically a static series of semi-improvised (and semi-coherent) raps between the stars.

Lacks the visual flair and bouncing bravado that characterizes better hip-hop clips and is content to recycle images and characters that were already tired 10 years ago.

The acting is amateurish, the cinematography is atrocious, the direction is clumsy, the writing is insipid and the violence is at once luridly graphic and laughably unconvincing.

A dull, simple-minded and stereotypical tale of drugs, death and mind-numbing indifference on the inner-city streets.

No one involved, save Dash, shows the slightest aptitude for acting, and the script, credited to director Abdul Malik Abbott and Ernest 'Tron' Anderson, seems entirely improvised.

... for all its social and political potential, State Property doesn't end up being very inspiring or insightful.

There are no featured audience reviews yet. Click the link below to see what others say about State Property!