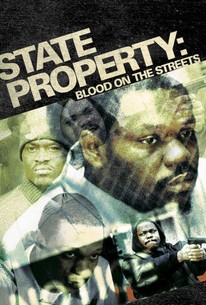 Hip-hop mogul Damon Dash wrote, directed, and stars in this hard-hitting examination of life in the criminal underground of a great city. Three different crime bosses are locked in a battle over the drug trade in Philadelphia. New York transplant Dame (Damon Dash) and his umbrella crew command a powerful network that controls the city's dope traffic, but he has two bitter rivals who both oversee competing gangs from behind bars -- Beans (Beanie Siegel), Philly-born leader of the once-dominant ABM Crime Syndicate, and Loco (Noreaga), a slick street hustler from Miami who has the bankroll to finance a powerful operation. As these three men and their underlings scramble for money and power, another player is quietly consolidating his forces and rising up against them. State Property 2: Philly Streets also features supporting performances from Mariah Carey, Ol' Dirty Bastard, Cam'ron, and a handful of other hip-hop and R&B stars.

Juelz Santana
as Himself

Jim Jones
as Himself

Neef of Young Gunz
as Neef

Kanye West
as Himself

Von the Dog
as Dame Crew

Joe Sherman
as The Fist

The Barry Sisters
as Mariah's Bodyguard
View All

Seeing two truly rich characters battling for supremacy can have the power of a symphony. Seeing two posses of dull thugs blasting away at each other has all the appeal of a CD single with a skip.

Dash's film is less the stuff cults are made of than fantasies.

You mean there was a State Property 1?

Slicker, funnier and more professional than its predecessor.

No more three-dimensional than your average brand-name-laden hip-hop video.

Less a sequel to a film than a brand extension.

Those interested in annoying things like plot or plausibility are best off steering clear of this inane celebration of all things thug.

The plot is strictly subservient to repetitive shootouts, the dialogue consisting of enough "f" and "n" words to be considered by Guinness.

This brutal chronicle of heavily armed drug dealers is best appreciated (or disdained) as a raw, bracing expression of the spirit of capitalism.

You may call the film blingsploitation but its fun-loving hoodlums know who's fooling whom.

At least Dash corralled every artist he knew into playing cameo roles, so bored or confused fans can bide their time star-spotting the likes of Mariah Carey, Kanye West and Angie Martinez.