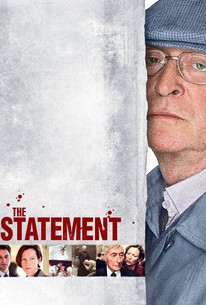 Critics Consensus: The movie bores despite a splendid performance by Michael Caine.

Critics Consensus: The movie bores despite a splendid performance by Michael Caine.

Critic Consensus: The movie bores despite a splendid performance by Michael Caine.

Set in modern day France, the story of Pierre Brossard who, as a young man, was a Nazi executioner under the Vichy regime. Brossard has never been brought to trial and has lived a peaceful and anonymous life, sheltered by right-wing elements within the Catholic Church. A new investigation into his crimes is launched and Brossard finds himself the target of hit men on the one hand--and police investigators on the other. A wily old fox, he keeps outwitting his pursuers while desperately trying to figure out who they are. Who will get to Brossard first? The investigators or the assassins?

Malcolm Sinclair
as Cardinal of Lyon

Critic Reviews for The Statement

Caine bounces back and forth almost randomly between pitiable and detestable, following the dictates of a formulaic plot.

Seems more an excuse to attack a target than an exercise in solid storytelling.

Partly because of Caine and partly because of meticulous work by veteran director Norman Jewison, The Statement is a fiction done so effectively, it rings true -- even slick lines that may otherwise be rancid.

Jewison is not sure if he wants to make a chase or message film.

The film operates well as a thriller and probably goes further than intended in extracting sympathy for its reprehensible protagonist.

... the thrilleresque aspects ... are most pleasing.

"The Statement is that rare, unassuming movie that has much to say and is so daring in its message that it is a wonder it has seen the light of day"

Confused at its core and too befuddled to make that a virtue.

Audience Reviews for The Statement

I really liked the narrative behind this film, however I was slightly confused as to who I should be rooting for. Opening with (and following) Pierre Brossard we can see he is truly sorry for his actions. Is that just to calm his own nerves and make himself feel better? Maybe, but he still pained himself over what he has done which led me to believe we should be on his side and want him to escape. Certainly casting Michael Caine in this role does that. But at the end the filmmakers professed this film to the 7 Jews who were killed all those years ago, so why make their murderer so human and so compassionate? I also found it slightly slow at times when nothing to progress the narrative happened. This is a good film and whilst I won't be watching it for a long while it's something I'll definitely revisit. Thanks in part to Caine's brilliant performance!

Cast: Michael Caine, Tilda Swinton, Charlotte Rampling, Alan Bates, Jeremy Northam, Ciarán Hinds, John Neville, Matt Craven, Edward Petherbridge Director: Norman Jewison Summary: The buried sins of the past almost always find a way to surface in the present, as Frenchman Pierre Brossard (Michael Caine) discovers in this drama directed by Norman Jewison. Pierre's quiet life in southern France is disrupted as he's haunted by his betrayals. During World War II, his Nazi sympathizing led to the deaths of 14 Jews. With a Nazi hunter (Tilda Swinton), the police and hired killers on his trail, it's his turn to be the hunted. My Thoughts: "The movie grabbed me right from the start with it's brilliant opening, but unfortunately it doesn't keep with that brilliance the entire film. In about thirty minutes in, it gets quite boring. Not one of Caine's best performances, but a movie he did carry on his own. It's basically him going from church to church in hiding. Not very interesting, but the story is. I wish they would have elaborated on it more then just showing Caine's character on the run. Also, what happened to this film being of french characters, they all sounded pretty british to me. Just not well made."

Not one of michael caines best of films its a bit boring really just following him around with his life and it just was very exciting!

Michael Caine plays the only interesting part , but even he can't help the sinking feeling of this flat, slow, superficial, unsympathetic tv movie with big aspirations. Too bad to know also that this may be Norman Jewison's last movie.