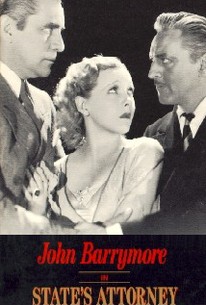 John Barrymore is the "State's Attorney" in the RKO picture of the same name. A brilliant criminal lawyer, Barrymore counts on his underworld connections to climb the ladder of success to the Governor's chair. "Humanized" by his girlfriend Helen Twelvetrees, a former streetwalker, Barrymore decides at long last to go straight, making mincemeat of his one-time mob patron William "Stage" Boyd in a thrilling courtroom finale. Barrymore's longtime drinking crony Gene Fowler collaborated on the script of State's Attorney with gangster-saga scrivener Rowland Brown. The film was remade (and extensively sanitized) as Criminal Lawyer in 1937.

The dialogue is sharp, but the script is weak.

There are no featured reviews for State's Attorney at this time.