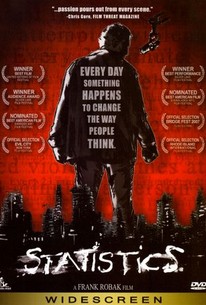 A Los Angeles radio personality takes to the airwaves to rail against human cruelty and apathy as violence, death, and tragedy sweep across the city in writer/producer/director Frank Robak's deeply humanistic film debut. Talk radio icon David Allen has just survived a fire that left his family homeless, his son injured, and his neighbor hospitalized. Now, as Allen tries in vain to make his listeners aware of the strife that threatens to consume them all, a rueful wave of inhuman cruelty engulfs the city streets just outside the locked doors of his studio.

There are no critic reviews yet for Statistics. Keep checking Rotten Tomatoes for updates!

There are no featured reviews for Statistics at this time.