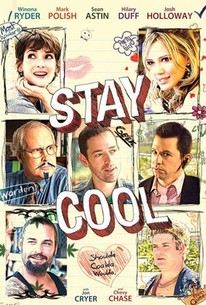 Henry McCarthy (Mark Polish), the 30-something author of the popular 80s-themed novel How Lionel Got Me Laid, returns to his suburban hometown of Sacramento to deliver the commencement speech at his former high school. Despite his success as an author Henry's return home has sparked all of the youthful dreams, desires and particularly disappointments he's never quite gotten over, specifically his unrequited affection for the girl who is now the local pharmacist: the elusive Scarlet Smith (Winona Ryder). Between run-ins with the outcast friends he left behind Big Girl (Sean Astin) and Wino (Josh Holloway), the school principal (Chevy Chase) and a seductive senior, Shasta O'Neil (Hilary Duff) who clearly has the hots for him, Henry is sent spinning through a time warp that incites all the old emotions and challenges of the world he grew up in. -- (C) Initiate Productions

Ashley Bell
as Valedictorian
View All

Attempts to pay homage to the '80s oeuvre of filmmaker John Hughes, but its singular lack of emotional logic, charm and humor bring to mind a couple of hours in detention instead.

This is thoroughly a family affair, but with the Polish brothers' upcoming film Manure just around the corner, Stay Cool feels a bit rushed, suggesting nothing more than an homage to Pretty in Pink or Some Kind of Wonderful.

Stay Cool is their most grounded effort, attacking the formulaic discomfort and confusion of an impending high school reunion. It doesn't always convince, but it's the most approachable Polish production to date.

There is much here to find admirable but a whole lot less to genuinely like.

After graduating high school and getting as far away from his small home town as possible, Henry McCarthy(Mark Polish, who also wrote the screenplay while his brother Michael directed) made it big by writing a best selling novel about his high school experiences. That entitles him to give one high school commencement speach. But somehow the airline is not so impressed when they lose his luggage. At least Henry has friends(Sean Astin & Josh Holloway) who are still there to give him a ride from the airport. And then Henry starts immediately obsessing over Scarlet(Winona Ryder) who barely knew he existed in high school and has problems of her own currently with her ex-husband Brad(Marc Blucas). "Stay Cool" is an uneven comedy with some great moments in amusingly detailing how high school never really ends. One can simply try to move on as best as one can. Just as much as Mark Polish's awkwardness in the lead works both for and against the movie, the movie's main strength comes from its supporting cast, namely Winona Ryder who definitely needs to be in more movies. Otherwise, there are a couple of odd references and product placement.

This film had it's moments. The characters were enjoyable and the juxtaposation of the audio-book and the situations happening on the screen helped bring a third dimension to the story. The film has it's glitches and problems (such as a 37 year old being so easily manipulated by an 18 year old.) but it makes up with the connection you have with the lead character. This is my first polish brothers film and it makes me want to look into their films more so Mike & Michael, you got a new fan. P.S.- Wynona Ryder, hottest actress EVER!!!

If you girls really like prom nights , graduations ,highschool ...etc check it out! As for you guys still can watch it because it is not annoying at all.Well ,I watched it because Josh Holloway was in the cast :) Although he always reminds me of Sawyer (if you have watched Lost you know what I mean!),this was like a sweet version of him!!!

I purchased this one as an ex-rental before seeing it. Reading some of the reviews here, was a bit concerned I had picked up a crap one, but actually I found this not bad. It is definitely not perfect, and has it's faults, the main one to me being the ending. (I am not a person who always needs a happy ending or a neatly tied up one, but it just felt that this was the type of movie that called for one). It's maybe pretending to be a little deeper than it really is. To me, this is just a fun movie about a man, Henry, who goes back to his hometown years later, after having written a book about his high school years and the one who got away (Winona Ryder - lovely here - the best film I have seen her do for years). Some of it is a little far fetched, as others have complained. For reasons to silly to go into, he winds up back in high school, where an attractive young student played by Hillary Duff takes a shine to him and asks him to her prom. It doesn't all make sense totally (then again, I was on 3 days of insomnia when I watched this, so perhaps I was just missing bits. Highly possible), but I think what it was trying to do was draw parallels to his life as it was back then, and how it is now (as it also has a voiceover of bits of his book, and the fictional character of Lauren who is, of course, Winona Ryder's character, Scarlet, thinly disguised). So he does find himself in silly situations, such as Scarlet's boyfriend, (the bully), beating him up. The movie itself is quite colourful to look at, kind of reminded me of Romy & Michele in parts (especially the funny scenes with Scarlet and her sarcastic best friend), Sean Astin also plays a funny over the top part as Henry's gay best friend who is a hairdresser. (Yes, stereotype). And Jon Cryer as Henry's sleazy agent. (Another 80's flashback!). Hillary is plastered all over the cover of the DVD (for the Australian release, anyhow), but its not really "her" movie. she doesn't appear in it a lot until around 45 minutes in. I think where this one will fail it is marketed to appeal to the present teen audience when really it is the 80's kids who will get a kick out of this. I would say give it a go. Could have been better, but definitely not a fail..