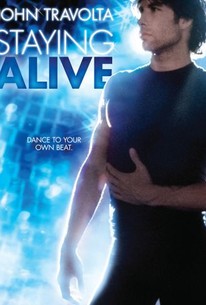 Critics Consensus: This sequel to Saturday Night Fever is shockingly embarrassing and unnecessary, trading the original's dramatic depth for a series of uninspired dance sequences.

Critics Consensus: This sequel to Saturday Night Fever is shockingly embarrassing and unnecessary, trading the original's dramatic depth for a series of uninspired dance sequences.

Critic Consensus: This sequel to Saturday Night Fever is shockingly embarrassing and unnecessary, trading the original's dramatic depth for a series of uninspired dance sequences.

This sequel to Saturday Night Fever is set six years after Tony Manero (John Travolta) blew the competition away during a local disco contest. Now he is an aspiring Broadway dancer who finally gets a part in a show. Once there, he discovers that the glamour is but a facade for hours of hard work, and that it has a detrimental effect upon his social life. Sylvester Stallone penned the script and directed while his brother Frank Stallone wrote the soundtrack.

Frank Stallone
as Carl
View All

Staying Alive isn't just a disappointment -- it's a disgrace.

As always Travolta is urban gorgeous and very charming. The rest of the film is neither.

The bottom line is that Staying Alive is nowhere as good as its 1977 predecessor, Saturday Night Fever.

All could be forgiven if it weren't for the soulless overall slickness.

A slick, commercial cinematic jukebox, a series of self-contained song-and-dance sequences that could be cut apart and played forever on MTV -- which is probably what will happen.

A sequel with no understanding of what made its predecessor work.

The production as a whole is too disjointed, repetitive and flat to really hang together.

[Sylvester Stallone] pours lots of energy but little intelligence into scads of short, sweaty scenes more suited to the rhythms of cable-TV ''rock video'' than to the wide screen.

It is a movie caught in a time warp: a slick MTV video that celebrates Eisenhower-era morality. For the Staying Alive audience, the problem is staying awake.

Not quite a career low for John Travolta -- Two of a Kind was still to come -- but one he nevertheless would probably love to forget.

Tracking Travolta's adventures as he gets to perform on Broadway and falls in and out of love, director Stallone is in his mindless mode when it comes to characterization.

Boring, terrible and the begining of Travolta's decline.

I got bored with this movie so fast, it's not even funny. No one cares about what Tony's boring life is like after all the interesting stuff already happened.

I usually expect sequels to pale in comparison to the original. I have lowered expectations when watching such movies. For instance, one of my favorite movies of the 80s was Karate Kid. The Karate Kid part II, while not nearly as good, was a worthy sequel. Same thing with Rambo, First Blood Part 1 and II, Godfather part 1 and 2, etc... This sequel however was unwatchable. Quite frankly, there was no reason to ever make this movie. Tony Manero's life in the first one was not that interesting. What made the movie "cool" was it capitalized on the disco craze and had up and comer Vinnie Barbarino (ok John Travlota) as the lead. The success of the movie was more about the timing than anything else. So now its six years later and we have Tony Manero back on the big screen, dancing yet again. Problem is, dancing is no longer as cool as it was in the 70s. John Travolta is beginning a decade long downswing of his career, and quite frankly, nobody cares about the character Tony Manero. Nobody left the original Saturday Night Fever saying, "I wonder what happens to Tony Manero". Nobody cared, it was simply a movie about the music and dancing with a marginal plot squeezed in. The plot of Staying Alive is utterly ridiculous: Dance instructor trying to become a "dance pro", while managing dual love interests. All this culminates in a Broadway show that is unwatchable. It was simply a bad movie in the early 80s. Today, its almost comical to watch. I'll give Travlota credit though, many actors would have been exiled after such a catastrophe...he fought his way back to stardom. I have to believe when this comes on cable, he has the ability to laugh at himself.

From the gritty electricity of "Saturday Night Fever" to sweaty Broadway dancing? It just doesn't carry over very well as a sequel. It felt a bit gay. I liked some of the music in it.