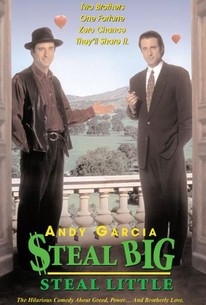 Director Andrew Davis followed up the action blockbuster The Fugitive (1993) with this Capra-esque box office dud that nevertheless featured engaging dual performances by Andy Garcia. Garcia stars as Ruben and Robby, twin brothers who were raised separately and have become total opposites. Ruben has recently inherited a 40,000-acre Santa Barbara estate from his eccentric guardian, Mona (Holland Taylor). A friend to artisans and migrant workers, Ruben wants to transform the land into a commune, while the cold-hearted Robby wants to steal it from his brother, develop it and make millions. Muddying the waters are Lou (Alan Arkin), a quick-thinking ex-cop and pal of Ruben's who is able to manipulate the law to his own purposes, Eddie (Joe Pantoliano), a shark lawyer who plays both sides against the middle, and Ruben's ex-wife Laura (Rachel Ticotin). When each brother masquerades as the other for a time, however, some insights are gained by both.

Drucilla A. Carlson
as Tonya

Remember those supermarket contests where the teams raced down the aisles, trying to pile as much stuff as possible into a shopping cart? Steal Big, Steal Little reads like the screenplay was assembled the same way.

The principals all seem to be enjoying themselves, so when do we get in on the fun?

An inpspired Alan Arkin and a great Cuban soundtrack can't make up for fuzzy politics and a limp script.

Fast-paced comedy romp which affirms the triumph of good in the great dance of life.

There are no featured audience reviews yet. Click the link below to see what others say about Steal Big, Steal Little!