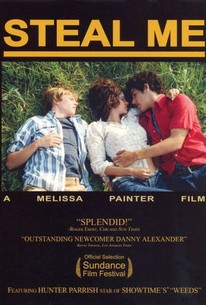 A family goes through some changes when an unusual sort of drifter crosses their path in this independent coming-of-age drama. Jake (Danny Alexander) is a homeless 15-year-old kid with a fondness for stealing things and a precocious appetite for older women. Jake is passing through a small Montana town as he continues his search for the mother who abandoned him years before when he meets Tucker (Hunter Parrish) while stealing the radio out of his truck. Though Tucker is a bit older than Jake, Jake's rough-and-tumble existence has added a few years to his life experience, and after a scuffle over the radio, the boys become fast friends. Tucker brings Jake home for a square meal, and while Tucker's father (John Terry) is wary of the young drifter, he agrees to let him stay for a few days in the family's barn. However, it turns out Dad was right not to trust Jake; not only does he get caught stealing trinkets from Tucker's younger sister, he becomes amorously involved with a married middle-aged woman who lives nearby. While Jake tends to this affair and toys with the trust of the family who has taken him in, he also offers some advice to Tucker on how to win the attentions of Lily Rose (Paz de la Huerta), a neighborhood girl he has a crush on.

Danny Alexander
as Jake
View All

Critic Reviews for Steal Me

Steal Me is a beautifully realized small film of understated power.

Everything about Steal Me, the new feature from the writer and director Melissa Painter, feels dangerously overripe.

Drifter comes to small town, gets all the ladies hot. But it's not the steamy, literate Picnic, starring William Holden - instead it's the pretentious Steal Me, an artily photographed, puzzlingly acted indie.

Solid performances can't save Melissa Painter's pretentious teen drama Steal Me, which plays like a cross between Dangerous Skin (without the gay sex) and Picnic (without the production values or credible situations).

Steal Me has at least one indie-film cliché too many.

What it lacks is believable dialogue, credible relationships and a serious foundation for its overripe psychology.

[Painter's] best achievement is the way she skillfully manipulates her almost-known cast into complicated characters that you can care about.

It's not really original stuff, and there are few genuine surprises, but Painter skillfully layers visual details and off-the-cuff dialogue into a smart, condescension-free piece on small towns and the complicated lives they contain.

The often meandering Steal Me is a film that says just enough and leaves the rest to us to work out.

If Alexander's performance isn't exactly a revelation, he's modest enough to allow pros like Seymour, a gifted actress usually relegated to supporting roles, do their thing.

The plot is never overwrought, but it never fully ripens either, mostly because of some of the actors' self-consciousness and the stop-and-go pace.

The result is a film imbued with the tender awkwardness and poignancy of those first wary explorations--those electric moments that occur in the small space between childhood and newly discovered maturity.

Audience Reviews for Steal Me

There are no featured audience reviews yet. Click the link below to see what others say about Steal Me!