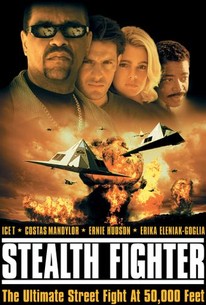 This action-adventure saga stars rapper turned actor Ice-T as Turner, who was once an ace pilot for the Air Force before faking his own death ten years ago. Now, in cahoots with an underground arms dealer who has gotten his hands on a nuclear submarine, Turner steals a Stealth bomber and together they intend to hold the U.S. government hostage. But one of Turner's friends from his days in the military (Costas Mandylor) knows his old pal just well enough to be able to guess his next move as he tries to foil their plot and keep America safe.

There are no critic reviews yet for Stealth Fighter. Keep checking Rotten Tomatoes for updates!

There are no featured audience reviews yet. Click the link below to see what others say about Stealth Fighter!