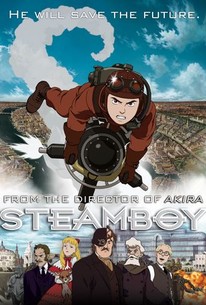 Critics Consensus: The story isn't the greatest, but there's an abundance of sci-fi eye candy to compensate.

Critics Consensus: The story isn't the greatest, but there's an abundance of sci-fi eye candy to compensate.

Critic Consensus: The story isn't the greatest, but there's an abundance of sci-fi eye candy to compensate.

Katsuhiro Otomo, director of the groundbreaking anime feature Akira (1988), returns with this visually striking fusion of the past and the future. It's the Industrial Age in England, reimagined, and various and sundry inventors and scientists are arriving in Britain to hawk their products while capitalism rears its ugly head. A gadget-happy British lad named Ray (voice of Anna Paquin) receives a mysterious package from his grandfather Lloyd Steam (Patrick Stewart) -- a tiny ball that turns out to be an engine toting immense power. As it happens, several of these little balls run the O'Hara pavilion, a massive, mobile fortress. Ray later discovers that his dad and grandfather are located inside of the pavilion; his dad, Eddie, has become mesmerized by O'Hara and subject to their whims, while Lloyd suspects that O'Hara may want to use the balls for nefarious purposes, and tries to put a definitive end to those plans. Indeed, the O'Hara people soon take over the Great Exhibition and turn it into a veritable circus for weapons dealers. Meanwhile, Ray starts to develop feelings for a young girl named Scarlett O'Hara.

SXSW: Short Reviews of "The King," "The OH in Ohio," "LOL," and "Maxed Out"
Ten Animated Movies to Compete for Oscar Consideration

It may be one of the most expensive anime features ever, but there isn't a wealth of entertainment on offer in Steamboy.

It's a sensationally designed piece of work.

Its problem is not a lack of things to look at. There's plenty of them, and they're all cool. It's just that, in this world of clanking, hissing machines, even the people seem like robots.

The movie never transcended its elaborate production work to achieve an independent reality. It's simply pictures of what never happened.

Until it careers into cacophony ... it's a lot of fun.

Steamboy, ultimately, shares deep-seated themes with the futuristic Akira. Both offer cautionary tales about scientific responsibility and the evils of war. And both look pretty cool, too.

This film has steam but it generates no heat.

The rendering of the characters and backgrounds is so rich and precise, that at times, it skirts into the third dimension.

Animated film is too violent for younger kids.

Works more than it fails.

The film's extended debates on the ethics of science, government and personal responsibility would recommend it to critics of a medium that too often panders to audiences.

Visually impressive, but I thought it was never going to end.

Steamboy is wonderfully animated, a highly imaginative production. While it is true that the feature is a bit thin on plot and characters, this is an action film and the action does not disappoint.

Not at all what I was expecting, but enjoyable none the less. A bit long in my opinion, but lots of cool concepts and visuals.

This Japanese computer-generated anime is cool, starts out as a nice Jule Verne-style adventure, but the story is too complicated and talky to maintain momentum. Animation of the machines is smooth and graceful, but the characters are stiff and charmless.