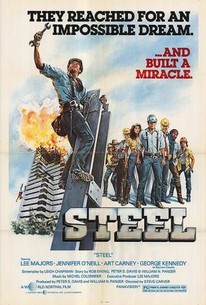 This action drama based around a construction site was a star vehicle for television actor Lee Majors between his two series gigs on The Six Million Dollar Man (1974-78) and The Fall Guy (1981-86). Majors stars as Mike Catton, a former well-regarded construction site foreman who became afraid of heights following a serious accident. When his friend Big Lew (George Kennedy) is killed while trying to rush the completion of an office skyscraper in an effort to beat a greedy bank's threatened foreclosure, Mike goes to work for Big Lew's daughter Cass (Jennifer O'Neill), recruiting a team of top workers to finish the job. Steel (1980) became an infamous picture due to the death of stunt man A.J. Bakunis, who died during the film's production trying to regain his former world's record for the longest stunt fall.

Ben Marley
as The Kid

Joseph DeNicola
as Tom
View All

There are no critic reviews yet for Steel. Keep checking Rotten Tomatoes for updates!

There are no featured reviews for Steel at this time.