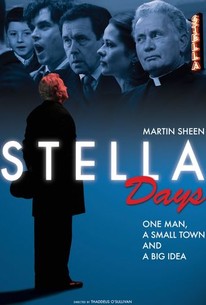 A small town cinema in rural Ireland in the 1950s becomes the setting for a dramatic struggle between Rome and Hollywood, and a man and his conscience. Martin Sheen stars as Father Daniel Berry in a story about the excitement of the unknown versus the security of the familiar, as those in the town find themselves on the cusp of the modern but still clinging to the traditions of church and a cultural identity forged in very different times. -- (C) Tribeca Film

Bernadette McKenna
as Woman in Confessional

There's no shortage of blarney in Stella Days, helmer Thaddeus O'Sullivan's largely winning drama about '50s rural Ireland, but it's blarney with a twist.

Soft Irish accents and good intentions aren't enough to save the poky Irish drama "Stella Days," set in a small town on the cusp of change in the 1950s.

Relaxed performances and pillow-soft photography compensate somewhat for the story's narrow ambitions, but they're not enough to invigorate a movie that clearly would rather charm than challenge.

Within the square framework, screenwriter Antoine O'Flatharta and director Thaddeus O'Sullivan are able to convey a lot about the atmosphere and attitude of a community in transition.

Thanks to its understated elegance and surpassing central performance, this modest, too-eagerly schematic period drama is more engrossing than it has a right to be.

While its catharsis is somewhat muted and its script uneven, this splendidly acted drama explores its themes with sensitivity, gentle humor and poignancy that will appeal in particular to older audiences.

Martin Sheen gives a lilting performance as dogged Father Barry. Sheen continues his professional and personal journey. The ending may not be as firm as one might want, but Stella Days is a further step in Martin Sheen's spiritual journey.

Working from a script as uneven as his accent, Sheen turns in an otherwise strong performance, but the sanitized Stella Days generates no real spark.

Sheen powerfully conveys his character's crisis of faith and the lightweight film captures its bleak setting and quirky townsfolk.

Well-meaning and well-done for what it is: overly familiar material lacking in viewer allure.

There are no featured audience reviews yet. Click the link below to see what others say about Stella Days!