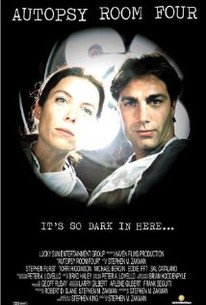 A twenty-two minute adaptation of goremeister Stephen King's gross-out short story of the same title, originally published in his 2003 collection Everything's Eventual, Autopsy Room Four tells the story of a rather unfortunate snake bite victim who wakes up on a hospital gurney in a morgue, completely paralyzed, and finds himself about to be autopsied. This low-budget, direct-to-video outing stars Animal House's Stephen Furst as the patient and Torri Higginson as one of the morticians unknowingly about to cut into a live specimen.

There are no critic reviews yet for Autopsy Room Four. Keep checking Rotten Tomatoes for updates!

There are no featured reviews for Autopsy Room Four at this time.