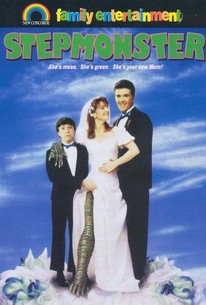 This lightweight horror movie is geared towards younger audiences as it follows the exploits of a little boy who is firmly convinced that the woman his father plans to marry is really a horrible monster in disguise. It all begins when his rather dull architect father George, as compared to young Todd's highly imaginative and much-loved grandfather, takes a job designing the immense country home for the seductively beautiful Denise. In time, Todd begins believing that scaly green monsters called tropopkins, are living in the forest near her house. Suddenly, his mother mysteriously vanishes and Todd is sent to live with his grandparents while his father completes his job. Six months pass and George returns with Denise, his new fiancee in tow. Things happen that cause Todd to suspect this step-mother-to-be is the leader of the tropopkins. No one believes him and Todd is sent into therapy. He remains convinced though and continues trying to postpone the wedding until he, his grandfather, his older sister and her boy friend Phlegm and can figure out how to destroy her.

The cast says it all.

There are no featured audience reviews yet. Click the link below to see what others say about Stepmonster!