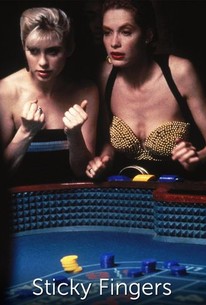 This screwball urban comedy is about two dippy roommates, struggling musicians Lolly (Melanie Mayron) and Hattie (Helen Slater), who are asked by an equally spacey, drug-dealing friend-of-a-friend Diane (Loretta Devine) to baby-sit a bag containing nearly a million dollars while she scoots out of town in order to avoid trouble. Once the money is in their possession, however, temptation proves too much for Lolly and Hattie, who use the ill-gotten cash to pay the rent, buy new instruments, and embark on a shopping spree for earrings, clothes, and shoes. While the girls dig themselves deeper into trouble with every dollar spent, they also encounter a variety of eccentric characters, including a fellow musician (Danitra Vance), their ailing landlady (Eileen Brennan), Lolly's boyfriend (Christopher Guest), and a parking lot attendant (Stephen McHattie). The latter, however, is actually a cop who's keeping surveillance on them from across the street. Mayron co-wrote the script for Sticky Fingers (1988) with actress and first-time director Catlin Adams.

David Hurwith
as Dancer
View All

A film that couldn't get to Central Park if it was standing there.

This movie has a lot of great actresses, but the story is stale, and their characters are annoying. There's more than one scene where they're just literally screaming their heads off for the whole time, and that really annoyed me. I felt that this could have been a lot funnier with a better script.