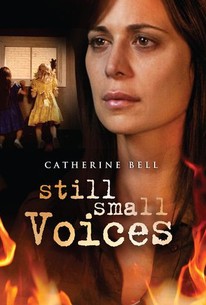 A 911 operator receives a desperate call from a terrified child, and attempts to solve the mystery of a young girl who vanished 30 years ago without a trace. In the wake of losing her own child, Michael Summer (Catherine Bell) quickly returns to work. After Michael receives a disturbing call 911 call from a defenseless child, she begins experiencing visions that lead her to believe a missing girl from Starlight, Pennsylvania didn't drown as reported, but was instead kidnapped. Now the closer Michael gets to the truth, the less clear it becomes whether her visions are real, or the disturbing projections of a damaged mind.

There are no critic reviews yet for Still Small Voices. Keep checking Rotten Tomatoes for updates!

Really good, but I like Catherine so she makes it worthwhile.