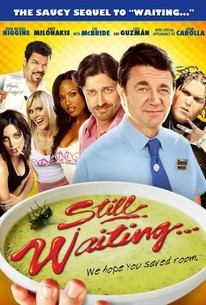 The shenanigans continue in this outrageous sequel to Waiting... that finds the staff of everyone's favorite good time restaurant entering into a stiff competition with the new Ta-Ta's Wing Shack opening up right next door. It's been two years since the events of the first film, and though there are still some familiar faces on duty, a whole new crop of employees are searching for exciting new ways to kill time and annoy customers at Shenanigans. But when Ta-Ta's Wing Shack announces its grand opening right next door, all of Shenanigans' best waitresses beat a hasty retreat; the tips are bigger at Ta-Ta's, and the uniforms are decidedly more revealing. To make matters worse, the customers are following suit. Now, in order to win back their customers and boost their bottom line, the Shenanigans team lifts their hemlines and starts working overtime to whip up the tastiest fast food in town. Justin Long, Luis Guzman, and Andy Milonakis return for a sequel featuring Adam Carolla, and written by original Waiting... screenwriter Rob McKittrick. ~ Jason Buchanan, Rovi

Vanessa Lengies
as Natasha
View All

A thoroughly and pervasively disagreeable followup...

A dreadful movie, and worse, if you can believe this one, something of a disappointment. With nothing new to offer the world of restaurant parody, this needless sequel is more skilled at lowering IQs than generating laughs.

All of the long-lasting charm (and the actual humour) of the first film fall by the wayside in this direct-to-video sequel.

clues to fellow comedy lovers that what you rented is not a "comedy": 1) if its a sequel all the funny actors are gone, while the asshats are back! 2) if its a sequel and the title is the same with one extra word for extra wow 3) if Luis Guzman is not only in it, but on the cover for lack of better-knowns 4) if the writer ran out of ideas and changed all unfunny dialogue to "fuck!" 5) if everyone is on the cover laughing at their own jokes to make you join in 6) if your "comedy" is a sequel, remake, Dane Cook move, American Pie movie that has nothing to do with american pie, National Lampoon movie that has less lampooning and more poon, or a movie shown on 'comedy central', the movie you have rented or seen on t.v. has never made anyone laugh ever. unless they... well... unless theyre you. in which case piss off.

never saw the first one so can't base my judgement off that...the movie is okay, nothing SPECTACULAR!! would not recommend

It's pretty impressive when you can take a successful movie like Waiting (with it's one trick pony style) and get most of the original cast to return to what will surely be a lass-than-stellar sequel. On it's own, the sequel sucks ass. But take away everything that made the first one so much fun and fill it with some new, unoriginal characters and it becomes ten times worse.