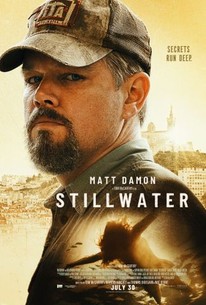 Critics Consensus: Stillwater isn't perfect, but its thoughtful approach to intelligent themes -- and strong performances from its leads -- give this timely drama a steadily building power.

Critics Consensus: Stillwater isn't perfect, but its thoughtful approach to intelligent themes -- and strong performances from its leads -- give this timely drama a steadily building power.

Critic Consensus: Stillwater isn't perfect, but its thoughtful approach to intelligent themes -- and strong performances from its leads -- give this timely drama a steadily building power.

Unemployed roughneck Bill Baker (Academy Award (R) winner Matt Damon) travels from Oklahoma to Marseille to visit his estranged daughter Allison (Academy Award (R) nominee Abigail Breslin). Imprisoned for a murder she claims she did not commit. Allison seizes on a new tip that could exonerate her and presses Bill to engage her legal team But Bill eager to prove his worth and regain his daughters trust, takes matters into his own hands. He is quickly stymied by language barriers, cultural differences, and a complicated legal system until he meets French actress Virginie (Camille Cottin), mother to eight-year-old Maya (Lilou Siauvaud). Together, these unlikely allies embark on a journey of discovery, truth, love and liberation.

This is a thoughtful, knotty character study, albeit one nestled inside a polished, and less interesting, action thriller.

It seems Marseilles's immigrant population, as with Knox herself, are treated as mere casualties in Stillwater's grand vision. If only that vision had some substance to it.

The quality of the acting makes it easy to overlook how increasingly leaden "Stillwater" becomes - but not easy enough.

This is a man who has lost step with his times... but there is something touching about his earnest politeness and also something novel: when was the last time you saw a conservative blue-collar dad in a leading role?

It'd be more openly ridiculous, feel far more manipulative, if not for Damon's performance... [His] magic is in making a certain plainness, a near-anonymity, defiantly charismatic.

McCarthy's excellent, if sprawling, script is more interested in the humans behind the headlines and the messy ways people try to reconcile their grief and guilt after indescribable trauma.

The movie really keeps you guessing as to the true motives of the characters with its complex plot.

This might be a crime thriller, but thrill it does not. Slow, distracted and unfocused, its narrative makes giant leaps one moment and drags its feet the next.

If we can't take responsibility for our own choices, then there can be no moving forward and your life will become a prison of your own making.

A slow burn that is far longer than it needs to be to get its point across. However, Matt Damon brings a lot of heart to this one, and makes it worth watching.

If tied to the real-life case, it's irresponsible and irredeemable. Separated from these knotty ties to the real world and accepted as a piece of fiction, it's a decent drama that begins strong before eventually losing its bearings and its believability.

Absent the sheen of a noble cause, Stillwater is a frustrating effort without a point.

There are no featured reviews for Stillwater at this time.