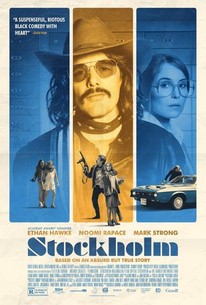 Critics Consensus: Stockholm can't quite do justice to its themes or the real-life events it dramatizes, but a light touch and well-chosen cast keep the end results consistently entertaining.

Critics Consensus: Stockholm can't quite do justice to its themes or the real-life events it dramatizes, but a light touch and well-chosen cast keep the end results consistently entertaining.

Critic Consensus: Stockholm can't quite do justice to its themes or the real-life events it dramatizes, but a light touch and well-chosen cast keep the end results consistently entertaining.

STOCKHOLM is based on the absurd but true story of a 1973 bank heist and hostage crisis documented in the 1974 New Yorker article "The Bank Drama" by Daniel Lang. The film follows Lars Nystrom, (Ethan Hawke) who dons a disguise to raid a central Stockholm bank. He then takes hostages in order to spring his pal Gunnar (Mark Strong) from prison. One of the hostages includes Bianca (Noomi Rapace), a wife and mother of two. Negotiations with detectives hits a wall when (at the request of the Prime Minister) the police refuse to let Lars leave in a getaway car with the hostages. As hours turn into days, Lars alternates between threatening the hostages and making them feel comfortable and secure. The hostages develop an uneasy relationship with their captor, which is particularly complex for Bianca, who develops a strong bond with Lars as she witnesses his caring nature. This connection gave rise to the psychological phenomenon known as "Stockholm syndrome".

It's fun watching Ethan Hawke's oddball robber socking it to The Man in a wig and stick-on handlebars.

The ever watchable Ethan Hawke is the best thing in this crime caper. It's uneven and lacks the power of its premise but always manages to keep your attention hostage.

From its gaudy 70s costuming to its goofy, wobbling tone, everything about this film feels uncomfortably broad.

Age becomes Ethan Hawke. The more raspy and wrinkled he gets, the better he is on screen... And here he holds together a film that is shaky in many respects and shouldn't work.

[Ethan] Hawke and his Easy Rider moustache are clearly having a wild old time and their gonzo enthusiasm just about powers this otherwise inert drama over the county line.

The one-note wackiness of tone wars against the witty potshots, presumably intended, at incompetence on both sides of the law.

Enjoyable caper, but that's about it.

One of those films that is absorbing enough to push viewers to read up on the source material - a larger-than-life ordeal as fascinating as it is outlandish.

Ethan Hawke proves that he not only can he perform in any film genre including comedy, and he can do it well.

Stockholm is a succinct and endearingly goofy take on the heist genre.

...a good-enough look into the origins of a real-life psychological phenomenon...

There are no featured audience reviews yet. Click the link below to see what others say about Stockholm!