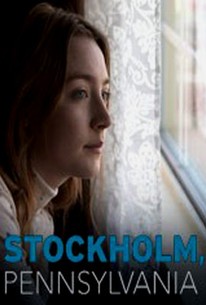 Stockholm, Pennsylvania, Nicole Beckwith debut feature as both screenwriter and director, stars Saoirse Ronan as a young woman who is reunited with her parents 17 years after she was kidnapped by a stranger when she was just five years old. Ben, the perpetrator, kept her locked away from the outside world, and led her to believe there had been a disaster that had wiped out much of mankind. The woman has a difficult time adjusting to her new existence, while the girl's parents deal with their own issues when it comes to their daughter's tragic history.

Strong performances from Saoirse Ronan and Cynthia Nixon keep Stockholm, Pennsylvania intense and absorbing, but Nicole Beckwith's initial impulse to tell her confinement story as a stage play feels as if it might have been a sounder choice.

With a bit more maturity and confidence in her vision, Beckwith is sure to come up with something that's a knockout all the way through.

A well-meaning disappointment, striving to say something about family and motherhood but mishandling the execution.

From its opening scene, the film feels desaturated and airless, as if the intrusion of energy or color might upset the characters' delicate task of healing.

While there are a few things that didn't quite feel genuine, Ronan and Nixon sell the unpredictable arc.

A provocative subject deserves a provocative platform. And while Stockholm, Pennsylvania is certainly provocative, it could stand to be a bit smarter.

The director originally conceived of "Stockholm" as a theater piece. Her original instinct may have better served the material.

Sincere but convoluted... The almost-campy plot mechanisms make it hard to take it very seriously.

Half of a good film and half of not a very good film, Stockholm, Pennsylvania's mid-runtime fall from grace almost needs to be seen to be believed.

Dominic Mill
We Got This Covered

The film devolves into ugly, useless histrionics that are more laughable than meaningful.

The tone-deaf misjudgment of the film's second half is catastrophic; a bafflingly ill-advised blunder that "Stockholm, Pennsylvania" can never recover from.

I thought I was going to enjoy this a lot more than I did. I felt it was a little long and very drab.