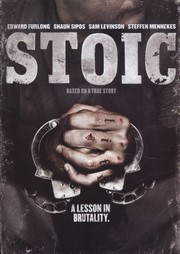 Rachael C
April 29, 2019
Can we please talk about the ELEPHANT in the room?
Okay, reviewers said the acting and words were pretty cliche..eh, these are inmates..they usually don't speak eloquently.
And "boring?" Definitely not, unless your a Sociopath.
Great directing, great acting, great raw video footage and I liked the interview segments in between disgustingness.
I love scary movies, I love drama. This Movie Was Shockingly Beyond Gross.
It will stick with you for days after
And Guys. Really? Is this how you really are? Reviewers acting so casual about the fact that a man sticking his penis in a man's ASS that he so called hates, as what an excuse? Is this what men secretly want to do? I only see women seeing this as the most vile movie they have ever seen, here.
Peter character was shocked when it got sexual. Yes what he did was awful enough.
Just when you think this poor kid has had way more than enough .there is something more.
This movie makes men look like animals. Worse. I looked it all up. It's all true. It happened.
I would seriously like to know why men pretend that other men's hairy asses digust them. Obviously not too much.

x x
½ September 30, 2017
Absolutely the worst movie I've ever seen, this movie made me feel physically ill and I don't think there's any need for movies like this. I wish I could unwatch this and erase my memory of it.

Trky B
½ February 1, 2015
My god how did I miss this. Uwe Boll apparently made his red dragon if u know what I mean.
This is one of the most realistic, claustrophobic, disturbing, and emotionally charged films ive ever seen. You have to see this.
Perfectly shot for the material, wonderfully acted with a hauntingly subtle score. This is the best Edward Furlong has been since American history X.
Wow.

Super Reviewer
Alex r
February 9, 2014
Soulless drama with a lacking story, and poor cast, Stoic is a bland film that really has no point. The intentions to create a serious drama are wasted due to the visceral quality that the film possesses. The cast here are terrible, and the film takes on a poorly made for TV feel, that just doesn't feel right. Stoic however is not made for TV, it just feels that way. This is one of the few more serious films by director Uwe Boll, and although he tried his best at making an effective drama, the film is purely a waste due to the fact that the film's plot feels stitches together within an hour or so. Boll is notorious in making bad films, but at times he has made good films. However Stoic, although a step in the right direction, doesn't deliver anything worthwhile for viewers. As you watch Stoic, you realize how bleak it really is, and how depressing the finished product is. Uwe Boll fails at delivering a good drama, and the cast really don't stand out here. Stoic is a train wreck by a director who clearly can't grasp at making an effective genre picture. Don't go into this one expecting a great film, you'll be disappointed. Boll would make a few better films, but Stoic isn't one of them. However, it does show that is willing to venture into more dramatic territory, which is good because all of his video game adaptations are horrible. Watch a different film if you want a better drama. Stoic is one of those films that have redeeming aspects to make it a truly engaging film going experience.

Super Reviewer
Todd S
½ December 12, 2013
Stoic explores the question of weather or not prison turns minor offenders into hardened criminals, by telling a true story that happened in 2006. The story is most defiantly an eye opener, but the truth is that it doesn't make for a very good movie. Four inmates are trapped in the same cell, twenty-three hours a day. Most of them are in prison for minor offenses, with sentences ranging from six months to six years. As the men play cards, three get suspicious of the fourth, and once they decide he's a cheater, they begin to torture and humiliate the man until the next morning, when one of them winds up dead. Edward Furlong is the only actor of recognition in this film, usually one of my favorite actors, but even he has a hard time making this story work. The truth is that no matter the situation, anytime you place four guys in a room and watch them for an hour and a half, it's bound to get boring. Stoic goes to extreme lengths to be beyond boring, because of it's perfectionist director, Uwe Boll. Boll has a reputation of doing things his own way and being a perfectionist about it. The constant changing of the camera angles as well as the inmates telling their own stories in cutaways, is somewhat clever, but ultimately there really isn't much here to base a film on. Stoic was a good idea, that poses an important question, through a shockingly true story, but it lacks the substances needed to entertain an audience. In other words it was one big bore of a movie that you should absolutely avoid.

Jennifer E
May 28, 2012
Wow. This is terrible, brutal, and unimaginable. How much of it is based on facts, I don't know but it may be worth looking into. If it did happen this way, it never, ever should have.
If it was the director's intent to make me feel horrified, he has succeeded. This is quite disturbing.

Al M
April 18, 2012
Four Stars: Alongside Seed, Stoic ranks as a surprisingly solid film by otherwise retched filmmaker Uwe Boll. The film opens with an inmate being discovered hanging in his cell and then proceeds as a series of flashbacks instigated by the interrogations of his cellmates, who ended up playing more than minor role in his death. While Stoic mainly uses the supposedly true story for exploitative purposes, it still manages to somewhat provocatively explore the effect of incarceration upon the ethics and identity of convicts. In particular, Stoic explores how ethical judgment disappears in the face of peer pressure and how environment affects ethical decision-making. Brutalizing, tough-to-watch, and somewhat provocative, Stoic does not quite achieve the level of sophistication that it aims for (because it is Uwe Boll), but it still manages to be a disturbing yet somewhat insightful piece of exploitation cinema.

Cory A
March 11, 2012
It was all right. I love violent torture films, but this one just got boring after a while.

Charles P
January 29, 2012
Boll sure knows how to film brutality. Good job, I guess. Probably better than his video game movies but I can happily state I've never seen one. Perhaps needed more zombies, or Tara Reid as an prison shrink.

Matthew J
November 28, 2011
It had potential and was definitely disturbing, but poor writing and lazy directing kept this from being anything more than low-budget exploitation. Uwe Boll always finds a way to take mediocrity to the extreme.

Kris V
September 15, 2011
Having seen more than ten of Dr. Uwe Boll's productions, I never expected him to deliver a movie that had me more or less biting a pillow for most of its running time. It's rough around the edges but this is a tense and raw movie. Great to catch Edward Furlong again too.

Elgan D
½ July 22, 2011
My first foray into the bleak filmography of Uwe Boll, 'Stoic' is not badly made but you have to question why it was made. Basically the film is 91 minutes of bullying.

Edward K
½ July 13, 2011
meh this was pretty good but edward furlong is amazing

Nick A
½ May 23, 2011
Nothing necessarily bad about Boll, but this movie is boring as hell. It's a real psycho crap though, and it will get under your skin, but you need a lot of patience. As far as acting goes, that might actually be considered decent.