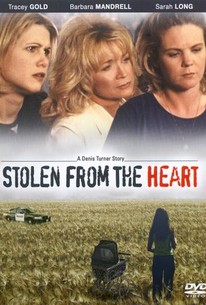 In a real change-of-pace role, Barbara Mandrell is cast as Texas widow Ruth Wagner, the mother of Leslie Wanger (Tracey Gold), who is expecting a baby of her own. Both mother and daughter are plunged into despair when Leslie's infant son is kidnapped, almost literally from the womb, by ex-prostitute Karen (Lisa Zane), who desperately hopes that her "instant" family will prevent her drug-dealing husband Cody (William Moses) from tossing her back on the street. Adding to the burden of the Wagner family is the fact that Ruth is suffering from a heart condition that could snuff her out at any moment. Described by one TV critic as "the stupidest TV-movie of the century thus far" (it wasn't, but it came mighty close), Stolen from the Heart debuted January 26, 2000 on CBS.

Courtney Wrathall
as Neil
View All

Critic Reviews for Stolen from the Heart

There are no critic reviews yet for Stolen from the Heart. Keep checking Rotten Tomatoes for updates!

There are no featured reviews for Stolen from the Heart at this time.

Stolen from the Heart Quotes