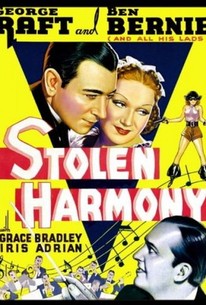 In this bouncy musical, a sax-playing ex-convict joins a swing band and embarks upon a cross-country tour. He does really well until an old friend tries to tempt him into becoming a criminal again. The convict refuses the offer so the "friend" retaliates by doing the job anyway and leaving the con to take the rap. Then the band is kidnapped by a powerful person desiring a private concert. The ex-con saves the band by informing on the crook. He is then allowed to play with them again and musical happiness ensues. Songs include: "Would There Be Love," "Let's Spill the Beans," "I Never Had a Man to Cry Over," and "Fagin Youse is a Viper" (Mack Gordon, Harry Revel).

Cully Richards
as Pete the Cabby

Kit Guard
as Convict in Orchestra

Mickey Garlock
as The Working Girl

Jane Wyman
as Girl
View All

It's a fabulous idea and provides plenty of opportunities for comedy, most of which, unfortunately, are neglected.

There are no featured reviews for Stolen Harmony at this time.