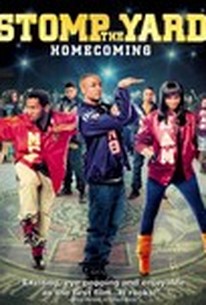 With the national step-off competition fast approaching, Truth University dance troupe The Theta Nus take in a talented young pledge who may be able to help them take the top prize, if he can just stop dwelling on his own problems and start perfecting the moves that will blow their rivals off the stage. Chance Harris (Collins Pennie) just can't seem to focus on dancing, and who can blame him: his family like is a mess, his relationship with his girlfriend is on the rocks, and now a street gang is out to teach him a lesson for failing to pay on a lingering debt. In order to win the competition, Chance will have to put all of his problems aside and focus on leading his troupe to victory. It won't be easy, but Chance is up to the challenge, and this time he's determined to get it right.

Teyana Taylor
as Rena
View All

Direct-to-DVD sequel lacks spark but is fine for teens.

Too many acting debuts in this movie. STY2 unfortunately doesn't live up to the hype or even come close to its predecessor. From the acting to the dancing something is just not quite right. A dance movie should feature extraordinary and amazingly strong cheorography, not short over-edited boring scenes.