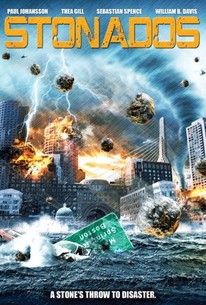 A retired storm chaser teams-up with his sister and his former partner to prevent Boston from being leveled by an onslaught of apocalyptic twisters that throw off exploding, bowling ball-sized stones capable of destroying entire city blocks. Convinced that the tornados tearing through the shores of Boston are the first wave of a devastating storm front, extreme weather expert Joe Randall watches in horror as the winds shift inland. It's an unprecedented weather phenomenon that could destroy the entire Eastern Seaboard, and the only means of stopping it may be a radical theory that flies in the face of modern meteorology. Now, as Joe's children find themselves trapped in a nearby stadium as the storm gains momentum, the concerned father recruits the two people he trusts most to help validate his controversial theory, and save the city. Meanwhile, their efforts may actually be accelerating the storm front, instead of subduing it.

William B. Davis
as Lighthouse Keeper

There are no critic reviews yet for Stonados. Keep checking Rotten Tomatoes for updates!

There are no featured audience reviews yet. Click the link below to see what others say about Stonados!