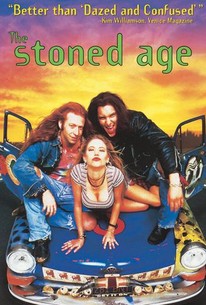 Though it was also released as Tack's Chicks, The Stoned Age is a more accurate summation of this engagingly sloppy "head" movie. The protagonists are Joe (Michael Kopelow) and Hubbs (Bradford Tatum), who are obsessed with an unending quest for beautiful girls and nonstop sex. In the course of a single night, the boys are introduced to several willing lovelies by a fella named Tack (Clifton Gonzalez-Gonzalez). Making enjoyable-if pointless-guest appearances in Stoned Age are Frankie Avalon, Taylor Negron, and two members of the Blue Oyster Cult.

Taylor Negron
as Himself

Frankie Avalon
as Himself
View All

Critic Reviews for The Stoned Age

Audience Reviews for The Stoned Age

Not much to this movie. A few laughs but the acting is pretty poor and some of the situations are a little hammy. I like it more for the nostalgia of my youth than for the quality of flick.

This kind of got dragged under by Dazed and Confused and while the two share a lot of elements, The Stoned Age seems to borrow just as much from Fast Times at Ridgemont High and other teen comedies from the late 70s and 80s. The character of Tack is the best part but it's nothing to go out of your way for.