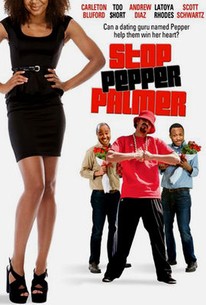 Level 33 Entertainment brings home the laughs with the hilarious dating comedy STOP PEPPER PALMER - written, produced and directed by Lonzo Liggins and starring Lonzo Liggins (127 Hours), Carleton Bluford (Benji: Off The Leash), Too $hort (Boyz In The Hood, Menace II Society), Scott Schwartz (A Christmas Story, The Toy), and LaToya Rhodes making her film debut. The film was shot by award winning cinematographers, Andrew and Danny James and was the Platinum Award Winner for Best Comedy as well as a Special Jury Award Winner for Best Supporting Actor at the 2014 WorldFest Houston Film Festival. (C) Level 33

There are no critic reviews yet for Stop Pepper Palmer. Keep checking Rotten Tomatoes for updates!

There are no featured reviews for Stop Pepper Palmer at this time.