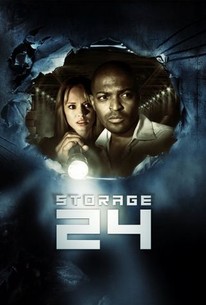 London is in chaos. A military cargo plane has crashed leaving its highly classified contents strewn across the city. Completely unaware London is in lockdown, Charlie and Shelley, accompanied by best friends Mark and Nikki, are at a Storage 24 dividing up their possessions after a recent break-up. Suddenly, the power goes off. Trapped in a dark maze of endless corridors, a mystery predator is hunting them one by one. In a place designed to keep things in, how do you get out?

Robert C. Freeman
as The Creature
View All

A monster from a familiar mother.

More chilling than the horror of the alien's close-quarters assault is the rank misogyny that more than offensively underscores the Melrose Place-grade human drama.

With Johannes Roberts directing, this apocalyptic piece of cheaply made science fiction wends its way through an absurd plot with some energy.

While Storage 24 makes for slickly competent SF horror, it suffers, as perhaps its very title implies, from a by-numbers approach to Alien-style materials that have already been revisited since 1979 in a dizzying surfeit of [films].

Like a high-end SyFy movie, Storage 24 is eminently watchable but only sporadically enjoyable.

Roberts gets the most out of the mildly novel premise and there are some welcome stabs of humour. The pacing is fairly nippy, too, while the derivative monster design is gooey enough to keep the thrills cheap and trashy.

From a technical standpoint, it's a mixed bag while the stories and characters you're trapped with for an hour and a half offer nothing compelling.

...it's impossible not to wish the filmmakers had aspired to something more than mediocrity.

If you're in the mood for a quick and fun monster flick, Johannes Roberts' low budget entry does the trick.

I wouldn't call this the best monster film I've ever seen, The Host is, like, worlds above this movie in almost every aspect. The writing, the acting, the story, the comedy. Everything, but this wasn't that bad of a film. I feel like I don't have much to say about this film, but watch me write a 1,000 word review. I hope that is not the case as this film really just came and went without making much of an impression on me. It's not that bad, when thinking back on it, but it's not something that will be particularly memorable to you 20 minutes after finishing it up. In fact, I finished the movie and I immediately went to sleep. It's that type of film, you just watch it and you're done with it. You don't think about it, you don't talk about it, you're just done. I suppose that should be a compliment, but I don't think it is in the sense that you don't really react to anything that you see. At least in shitty horror movies there's the release of that pent-up frustration over having seen a terrible movie. It's therapeutic, in a sense. It's not that I enjoy watching shitty horror movies because it gives me a chance to shit on it, it's that at least it got some sort of emotional reaction from me. As opposed to this one, where there's nothing for me to really say about it other than it's perfectly watchable. On to the things I did like, the monster make-up is actually really quite good. It's a mix of practical make-up and computer graphics. While the computer graphics are a little lacking, their usage is so minimal that it doesn't really affect the movie one way or another. This make-up effects aren't nearly as good as the ones in Cabin Fever: Patient Zero, a movie that isn't good but has some of the best practical make-up effects in any horror movie in years. But, at the very least, the monster in this film actually looks and feels like one rather than a poor CG. The acting is fairly decent all things considered, the characters, while one-dimensional, at least have some sort of story going so that, at the very least, you can somewhat be invested and care about them. It doesn't always work, but at least they make an effort to give you a reason to want to watch how everything plays out for these characters. The gore is decent, nothing to really write home about. Of course, the film has the stereotypical 'it's not really over' ending that have become an absolute joke in horror for, seemingly, decades now. With that said, this film was perfectly fine. It won't make you feel anything, it won't make you pull your hair out, and that's a good thing for some who look down on the horror genre, but it's not something that will stick with you for a very long time. It's watchable while still being below average, I can't complain a lot. Not perfect, but there's some decent stuff here that some horror geeks will probably appreciate more than me.

Disappointing film, when I saw the trailers I thought it could've been one of those rare low budget gems......but it's just not very interesting and apart from Noel Clarke the acting is rather poor as well. Didn't think the alien creature design was the best either. It's a missed opportunity.

The only difference between this low budget chiller and a SyFy channel production is that it features the old school technique of a stuntman in a rubber monster suit rather than a dodgy CG creation. I applaud the decision and it is a pretty impressive costume but otherwise this is just your standard spam in a cabin flick. The usual group dynamic cliches are on display. Clarke has been dumped by Campbell-Hughes who is conducting an affair with his best mate O'Donoghue. You won't need to be a genius to figure out how this plotline will resolve itself. When a movie of this type has a formulaic script it relies on it's set-pieces. In Roberts' hands they fall flat, the kills are particularly dull and uninventive. Most characters meet their fate by being simply pulled off screen. A "family" movie like "Jurassic Park" is far more gruesome in this respect. In an attempt to liven up the dialogue scenes which make up most of the running time, he shakes his camera and shoves it in his actors faces. A master of suspense he's not. The uninspired script is written by the film's leading man Clarke. In the past half decade he's become something of a young British Roger Corman, churning out movies as a writer, director and actor. They usually tend towards an urban London aesthetic and I've avoided them for this reason. Perhaps he should stick to gritty dramas set on council estates as horror movies set in storage facilities don't seem to be his thing.