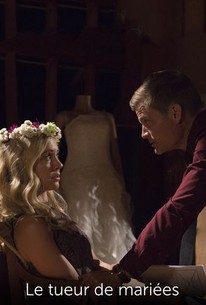 Sets two young girls, Annette (Cassi Thomson) and Molly (Samantha Cope) against a thief and murderer Dayton (Casper Van Dien). On the fateful night Dayton is pulled over by the cops just after a heist that went bad and ended with murder. The police don't know about his crime but they do get him for driving a stolen car. After he serves his 18 months in prison for grand theft auto he is released only to discover that Annette and Molly have purchased his storage locker; the contents of which is evidence that could send him to prison for life and just as important to Dayton the locker contains precious keepsakes and memories of his long dead mother. Now he wants his locker back and will do anything to anyone who stands in his way. Annette and Molly are unsuspecting targets as a mentally unstable Dayton infiltrates their lives, stalking them in plain sight as he sets his trap to take back his locker, do away with the evidence it contains and then do away with the only witnesses - the girls.

There are no critic reviews yet for Storage Locker 181. Keep checking Rotten Tomatoes for updates!

There are no featured reviews for Storage Locker 181 at this time.