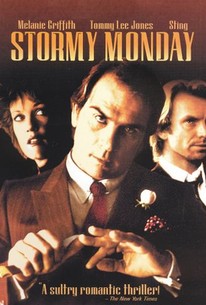 Stormy Monday is a four-person character study in which style is all that matters. This tautly constructed, deftly executed crime thriller is set in economically depressed Newcastle England. Sting plays Finney, a relatively honest Newcastle jazz-club owner who crosses the path of crass American gangster Cosmo (Tommy Lee Jones). Flaunting his wealth at every opportunity, Cosmo wants to involve Finney in a land development deal -- if only he'll give up his club. Both men are enamored of Kate (Melanie Griffith), who becomes a pawn in their ongoing one-upsmanship. Kate and her lover (Sean Bean) try to prevent Finney from corrupting his own sense of values by wallowing in the gutter with Cosmo. Stormy Monday, the first feature-length directorial effort of former jazz musician Mike Figgis, who also wrote the script and composed the score, tells its story using subtle shadings of character and a vivid evocation of its Newcastle setting rather than through violent action. Figgis's moody direction of his excellent screenplay is quietly effective and brimming with visual nuance and irony -- particularly in its perceptive take on love, money, jazz, and economic necessity.

Terry Day
as The Krakow Jazz Emsemble
View All

All visual flash and no script, with comatose performances to boot.

Mix American gangsters, molls and majorettes with Polish avant-garde jazz musicians against a Newcastle background - and what you've got is a curious homage to B movie Hollywood and the rain-washed neon of the pulps.

Mr. Figgis, who is a musician as well as a film maker, brings the place, the plot and the film's haunting characters vibrantly to life. What's more, he makes them irresistibly interesting.

Jones works his machismo persona into a lather, but it's unclear what he's doing in this movie, so he's more a source of campy fun than menace.

It is all style and promise, a come-on that keeps on coming on but never satisfies. The Big Tease.

"Stormy Monday" is about the way light falls on wet pavement stones, and about how a neon sign glows in a darkened doorway.

A smoky, jazzy mood-ring of a movie.

Throughout "Stormy Monday," the characters are sharply drawn, the dialogue is bracingly hardboiled, and the tension is skillfully sustained.

A strong exercise in mood early in Mike Figgis's career.

An atmospheric mix of urban grit and northern noir assembled with the artful imagery and moody timbre we've come to expect from Mike Figgis.

There are no featured audience reviews yet. Click the link below to see what others say about Stormy Monday!