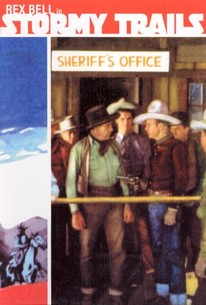 Stormy Trails was one of six Rex Bell westerns produced by M & A Alexander for the 1936-37 season (its New York premiere occured several months after its general release). Still as tall in the saddle as ever, Bell plays Tom Storm, who tries to save his family ranch from predatory plunderers. Making his task difficult is the fact that Tom's brother Billy (Bob Hodges) seems to have joined the enemy camp. With so much he-man action to contend with, heroine Lois Wilde is only able to make sporadic appearances throughout the film; in fact, she is seen less often than the omniprescent microphone boom which shows up in several scenes. Shortly after completing Stormy Trails, Rex Bell retired from films to enter Nevada politics.

There are no critic reviews yet for Stormy Trails. Keep checking Rotten Tomatoes for updates!

There are no featured reviews for Stormy Trails at this time.