The Story of Louis Pasteur1936 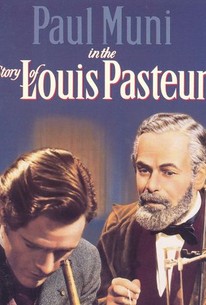 The Story of Louis Pasteur Photos

"Every time Paul Muni parts his beard and looks through a microscope, we lose a million dollars." Producer Jack Warner's lament concerning Muni's historical dramas is cute enough, but hardly backed up by facts; the economically produced The Story of Louis Pasteur proved to be a surprise hit for the Brothers Warner. The Sheridan Gibney-Pierre Collings screenplay concentrates on Pasteur's tireless efforts to find a cure for anthrax and hydrophobia. The famed French scientist is continually challenged and thwarted by his principal rival, hidebound bacteriologist Dr. Charbonnet (Fritz Leiber). The film's climax, involving a desperate Pasteur, the immovable Charbonnet, Pasteur's ailing daughter (Anita Louise), and a hydrophobia-infected youngster (Dickie Moore), is straight out of the Curfew Shall Not Ring Tonight school of melodrama. Within the film's context, however, this contrivance works magnificently. Virtually thrown away by Warners upon its first release, The Story of Louis Pasteur was finally awarded class-A treatment when the picture proved to be favorite with audiences and critics alike; Paul Muni's Academy Award win was the mere icing on the cake. The film's success led to Warners' decision to go ahead with 1937's The Life of Emile Zola, also starring Muni. This time, the studio copped its first Best Picture Oscar.

Mabel Colcord
as A Lady

Lotta Williams
as Cecile
View All

Critic Reviews for The Story of Louis Pasteur

Expert casting and splendid production are the points in the film's favor, primarily. Paul Muni in the title role is at his very top form.

An excellent biography, just as it is a notable photoplay, dignified in subject, dramatic in treatment and brilliantly played by Paul Muni, Fritz Leiber, Josephine Hutchinson and many other members of the cast.

A tender service to science, depicting the life of the great chemist. Some remarkably lucid expositions of the principles of bacteriology...

An honest, interesting and well-made picture.

Muni offers a fine characterization that shows the famed scientist as a man faced with extraordinary obstacles.

Oone of the most stirring and memorable of the great Warner Bros biopics.

This fictionlized tale of the great French scientist belongs to a cycle of Warner biopics of great men, many of whom were played by Paul Muni, who was Oscar nominated for this part (so was the film).

Audience Reviews for The Story of Louis Pasteur

I've come to love the performances of Paul Muni through the characters he portrayed in the 30's. He is like a character actor who blends into his character through makeup so fully that you don't recognize him otherwise, and yet he plays the leading man with powerful natural delivery of his lines.

The Story of Louis Pasteur Quotes