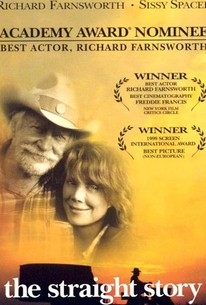 Critics Consensus: With strong performances and director David Lynch at the helm, The Straight Story steers past sentimental byways on its ambling journey across the American heartland.

Critics Consensus: With strong performances and director David Lynch at the helm, The Straight Story steers past sentimental byways on its ambling journey across the American heartland.

Critic Consensus: With strong performances and director David Lynch at the helm, The Straight Story steers past sentimental byways on its ambling journey across the American heartland.

From director David Lynch comes a lyrical portrait of one man's real journey across America's Heartland. Filmed along the 260-mile route that the actual Alvin Straight traversed in 1994 from Laurens, Iowa to Mt. Zion, Wisconsin, "the Straight story" chronicles Alvin's patient odyssey and those he meets along the way. When not rolling along at five miles an hour aboard his '66 John Deere, Alvin encounters a number of strangers, from a teenage runaway to a fellow World War II veteran. By sharing his life's earned wisdom with simple stories, Alvin has a profound impact on these characters that color his pilgrimage.

Everett McGill
as Tom The Dealer

Joseph A. Carpenter
as Bud

Randy Wiedenhoff
as Fireman No. 1

Jerry E. Anderson
as Fireman No. 2

Ralph Feldhacker
as Farmer on Tractor

Garett Sweeney
as Boy in Truck

Peter Sweeney
as Boy in Truck

Tommy Fahey
as Boy in Truck

Matt Fahey
as Boy in Truck

Dan Fahey
as Boy in Truck
View All

Critic Reviews for The Straight Story

It's intriguing to watch the Lynch of Blue Velvet and Lost Highway feel his way toward a less wounding surrealism -- into images that have power to hurt and will do none.

It seems only fitting that Lynch's most unambiguous, sentimental film should concern a man named Straight and the title is entirely apposite.

Instead, like Alvin, [Lynch's] film sets out on its mission in its own unassuming way and; inviting as those campfire flames around which so many stories have been told.

David Lynch's movie - the finest he has made since "Blue Velvet" - is serenely bereft of postmodern cynicism.

With his sweet, lyrical masterpiece... David Lynch frees himself from the heavy irony and noir affectations of his last few films, discovering the pure, mythical slice of Americana previously confined to Agent Cooper's coffee and donuts in Twin Peaks.

As far as I can see, [David Lynch] simply spotted a great story and embraced it. So will you.

The Straight Story is a small motion-picture miracle. How could a film whose high points include a man tasting his first beer in three decades be anything else?

This is the act of forgiveness given the proper cinematic and moral weight it deserves, following one man across the country on a lawnmower as he tries to make amends. You will cry your face off.

It's unlike anything else in Lynch's filmography, and it's genuinely brilliant.

It's hard to imagine a gentler film, yet Lynch fully exploits the stately pace to gaze fondly upon life's rich pageant.

The Straight Story could easily slide into melancholy and sentimentality without Lynch's sensibility, an odd mix of up-by-your bootstraps American conservatism and on-the-road romanticism.

Audience Reviews for The Straight Story

Walt Disney and David Lynch are two names that you wouldn't ordinarily expect to see involved on the same project. Disney is, of course, the leading production brand for family entertainment and Lynch's work couldn't be further from that magical and innocent material. However, that's exactly what we're looking at with The Straight Story which is a complete change of direction from the usually dark and disturbing Lynch and he proves to his naysayers that he's entirely able to construct something of a different nature altogether. Plot: After hearing that his estranged, older brother has taken seriously ill, 73-year-old Alvin Straight (Richard Farnsworth) decides that he's going to put aside their differences and visit him before it's too late. Unable to drive a car or take public transport, Alvin buys himself a ride-on lawnmower and begins his long journey over hundreds of miles in the most unconventional way. Not just in terms of the main characters' namesake, The Straight Story is exactly what it sounds like; a straight and simply told tale that's, without doubt, the most accessible film on Lynch's resumé. Those with a sound knowledge of Lynch will notice that the characters have no nefarious purposes, there's no metamorphosis, dream logic or hidden metaphors. This is an emotional and heartfelt odyssey about self-reflection, regrets and family connections and there's nothing to suggest that Lynch isn't absolutely at ease with lighter material. His film is a beautiful and poignant road trip that's full of pathos and stunningly captured landscapes. Despite the simplicity, Lynch still can't contain his propensity for oddball characters and slightly off-key tones but it entirely works for this material. What's most strange about this story, though, is not as a result of Lynch's involvement but because it's actually based on a remarkable true story. The one thing that will draw reminders to Lynch's usual work is his love for small town America and the odd inhabitants therein. Although he keeps himself on a leash, he is still able to capture the idiosyncrasies and mannerisms of ordinary people which still adds a (albeit lesser) surrealistic flavour to the film. Lynch is aided considerably with regular collaborators as well; Freddie Jones' sublime cinematography captures some stunning images and Angelo Badalamenti's beautiful score compliments the proceedings. At the heart of the film, however, is a commanding and heartfelt central performance from Richard Farnsworth. Rightly Oscar nominated for his superb work, Farnsworth is the beating heart of this story - a man that has come to terms with himself and the mistakes he's made in life but still has enough left in his twilight years to right some wrongs. Sadly, Farnsworth's outstanding performance is tinged with poignancy and sadness itself as the actor died with a self inflicted gunshot wound to the head, shortly after the film's release. Apparently, he himself, was nearing the end of his life with bone cancer and took the decision to go out on his own terms - much like the character of Alvin Straight. A wonderful and measured piece of storytelling from David Lynch. For those that can't handle his darker and more twisted films, then this is one for you. There's no denying it's charm and it's introspective reflection of life and all the challenges that come with it. This really is a pleasant, yet bittersweet journey. Mark Walker

A surprise here even before the film gets to rolling: 1) Its a Disney production and 2) its directed by David Lynch. If ever there was unlikely matchup this is the one. And yet ... a remarkable effort, one for adults only, but not for the reasons you might think. An ailing elderly man travels across country to visit his ailing elderly brother - on a lawnmower. The action happens just about as fast as a lawnmower goes that's what'll freeze out the attention deficit disordered younglings. But for the older amongst us a unique look at a sober speed about what's truly important in life, with quality performances by all concerned.

An unusually straightforward and delicate film by David Lynch that calls for a bit of patience from the viewer but proves to be extremely moving and more than rewarding - and Richard Farnsworth is just wonderful, a world of emotions conveyed in every detail of his face and expression.

A David Lynch movie without murder, switched personalities, inner monologues or even the slightest hint of cynicism? Unbelievable? Indeed. And yet that's exactly what he delivered here with the heart-warming story of an old man traveling 500 miles on a lawnmower to see his ill brother. Of course the film is as slow as that sounds, but still so refreshingly kind-hearted, sweet and entertaining. Alvin Straight, incredibly convincing and lovably portrayed by the late Richard Farnsworth, meets people on the road and shares his experience with them. It is his face that stays with you long after the film, as well as the beautiful images of the fields he travels along, while the fiddles hum their Americana sounds. A beautiful, rewarding and deeply humane feel-good story that deserves all the praise it got.