The Strange Affair of Uncle Harry (Guilty of Murder?) (1945) 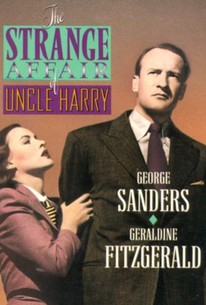 Fabric designer Harry Quincey (George Sanders) has the unhappy task of caring for his tiresome unmarried sisters, Lettie (Geraldine Fitzgerald) and Hester (Moyna MacGill). When Harry falls in love with Deborah Brown (Ella Raines), Hester is delighted, but Lettie smolders with jealousy. Upset at Lettie 's opposition, Harry would like nothing better than to do her in. Does he? And what has really happened here? When originally presented on Broadway, Thomas Job's play +Uncle Harry utilized a complex flashback technique in unfolding its story, which was capped by a grimly ironic ending. Stephen Longstreet's screenplay not only takes a more linear approach, but also radically alters the ending to conform with the censorship strictures then in effect. The Strange Affair of Uncle Harry was one of several Universal film noirs of the 1940s produced by longtime Alfred Hitchcock associate Joan Harrison.

Will Wright
as Mr. Nelson

Rodney Bell
as Joe the Greek

Jan Williams
as Quartet
View All

Critic Reviews for The Strange Affair of Uncle Harry (Guilty of Murder?)

The acutely recorded small-town characters and atmospheres, and the intense performances of all four principal players, are something more.

Had it ended two minutes earlier, it would have been a considerably more successful film. Like many Hollywood dramas of the 1940s, it stumbles during its dismount.

Darkly poignant while remaining on message.

Audience Reviews for The Strange Affair of Uncle Harry (Guilty of Murder?)

This was a great movie until it got to a very bad cliched ending. If they would have ended it before that, or changed it, it would have been so much better than it was. Overall pretty good, but not as good as it could have been.

The Strange Affair of Uncle Harry (Guilty of Murder?) Quotes