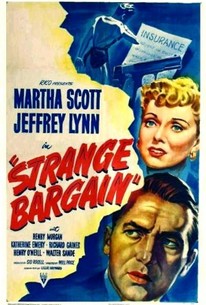 Jeffrey Lynn plays a bookkeeper who fails in his attempt to get a raise from his employer (Richard Gaines). The boss explains that the company is on the verge of bankruptcy, and that he is planning to kill himself. He offers Lynn $10,000 if Lynn will make the suicide look like murder so that the boss' family will collect on his insurance policy. Lynn agrees--and finds himself the fall guy in a complicated fraud scheme. Much of the footage of Strange Bargain showed up as flashbacks in a 1989 episode of TV's Murder, She Wrote. By removing the original happy ending, the TV installment allowed Jessica Fletcher (Angela Lansbury) solve the mystery of the boss' murder--and to exonerate the long-imprisoned bookkeeper, played again by Jeffrey Lynn! Also appearing on this remarkable Murder She Wrote were Lynn's surviving Strange Bargain costars Martha Scott and Harry Morgan.

Robert Bray
as McTay
View All

There are no featured reviews for Strange Bargain at this time.