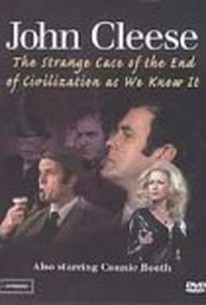 John Cleese co-wrote and stars in this satiric comedy as the less-than-spectacular progeny of the world's greatest detective. A mysterious super-villain announces across the globe that the world will come to an end in five days unless their demands are met. Research reveals that the fiend in question is descended from the infamous evil-doer Dr. Moriarty, so Scotland Yard takes the logical approach and contacts Arthur Sherlock Holmes (John Cleese), the grandson of the legendary detective Sherlock Holmes who ferreted out Moriarty so many times in the past. However, Arthur soon reveals himself to be dim-witted, inept, and not in especially good control of his drug habit, while his sidekick William Watson (Arthur Lowe) is even more pathetic, despite his dependence on his electronically altered testicles. Realizing he needs help, Arthur calls upon the world's best known detectives to come to his aid, though by bringing them all to one place, he's also created an irresistible target for the young Moriarty. The Strange Case Of The End Of Civilization As We Know It also features guest appearances by Denholm Elliott, Ron Moody, Connie Booth, and Bert Kwouk. ~ Mark Deming, Rovi

A dreadful mess that at a meager 55 minutes still feels too long.

There are no featured reviews for Strange Case of the End of Civilization as We Know It at this time.