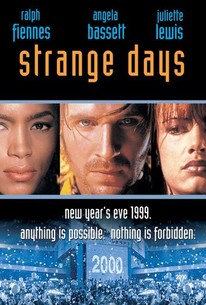 Critics Consensus: Strange Days struggles to make the most of its futuristic premise, but what's left remains a well-directed, reasonably enjoyable sci-fi fantasy.

Critics Consensus: Strange Days struggles to make the most of its futuristic premise, but what's left remains a well-directed, reasonably enjoyable sci-fi fantasy.

Critic Consensus: Strange Days struggles to make the most of its futuristic premise, but what's left remains a well-directed, reasonably enjoyable sci-fi fantasy.

This epic thriller is set in a hellish Los Angeles during the last days of the 20th century. The tale centers on Lenny Nero, a sleazy grifter who sells voyeuristic scenes. After his lover Faith leaves him, he tries to win her back after learning that she is in danger.

Glenn Plummer
as Jeriko One

Rio Hackford
as Bobby the Bartender

Billy Worley
as Dan from Silverlake

Lisa Picotte
as Lori from Encino

James Acheson
as Cop in Bathroom

Chester A. Whitmore
as African Dancer

Strange Days is not a simple film, but a profound sensory experience, where the filmmaker is the prophet of a reality just around the corner.

Strange Days does something most dystopian films don't: it presents a future where we aren't all unhappily oppressed in a similar fashion.

Director Kathryn Bigelow comes closer than any other filmmaker to turning movies into a virtual reality trip.

Once the premise has lost its promise, and Fiennes's brave attempts at characterization are sacrificed to pseudo-dazzle, everything appears awfully humdrum and, yes, distinctly dated.

Strange Days is a careening, high-decibel vision of the near future that combines science fiction, murder mystery and social commentary. It is not entirely successful, but it's a worthy effort.

Fortunately, the very convincing performances along with the entire climax of the film, helps to cover the problems of its realization and its script. [Full Review in Spanish]

Strange Days hurtles down the track for two hours, frantically trying to warn us en route to the Big Switchback, only to pull up in a hiss of smoke and hot air.

The movie went off like a landmine in Lincoln Center, traumatizing upscale audiences with its pulp semiotics and Bigelow's blunt-force filmmaking.

Messy, dreary and repulsive slick near future sci-fi/film noir thriller that both dazzles and is bombastic.

Tricks, tricks, and more tricks work to disguise this common whodunit from discriminating viewers. There's a murder (naturally) which we find out about with the aid of this new tech that allows the user to experience everything the cameraman does. The killer films his murders and leaves the disc for our detective to find ... and so, who did it? Your job, should you choose to accept it, is to find the galoot. If you've seen a detective flicker not two you'll solve this in a thrice if you can get by all the bells and whistles meant to fool and distract you.

Strange Days is an intense and thought-provoking cyberpunk sci-fi murder mystery thriller co-written by James Cameron and former film critic Jay Cocks, and directed by Cameron's ex-wife Kathryn Bigelow. Set in Los Angeles two days before the year 2000, we follow Lenny Nero, an ex-cop turned black marketeer whose product of choice to peddle is a SQUID- a headpiece that allows one to transmit digital recordings of other people's thoughts, feelings, and memories directly into their brain. He sells both the discs, and the equipment. Sex and violence/crime are the primary subjects of request, though Lenny's one rule is that he doesn't deal in "blackjacks" or snuff clips. When not doing his SQUID dealings, Lenny spends his time pining for Faith- his punk rocker ex-girlfriend who is now involved with a shady record executive named Philo Gant. This subplot then gets connected to the rest of the film when Lenny, after receiving a snuff clip of the rape and murder of a mutual friend of his and Faith's, gets embroiled in the resulting murder mystery, which is in turn connected to the recent death of a rapper/social activist on Gant's label. This all sounds really convoluted and complex, but it's actually not. It's mostly just really difficult to try to easily explain without giving too much away, which I sort of already did to an extent. But not too much. Anyways, this is a really intense and thrilling film. The basic ideas of the technology are apparently cribbed from the film Brainstorm which I have yet to see, but want to. I'm not sure how much of an input Cocks had here, but it may not have been much as Cameron also gets a 'story by' credit here. Another fun thing is to try to distinguish Cameron's style from Bigelow's. Sometimes this is really hard, but it adds another level of enjoyment to the proceedings. The film pulls no punches when it comes to the dark and gritty subject matter and content, but mature and open minded viewers will probably find a lot to enjoy here. It's all done quite well, and comes off as earned as opposed to exploitative (and for the sake of it). From a technical perspective, this film is a marvel. There SQUID sequences are appropriately done as POV, often times as long takes/tracking shots. The opening scene especially is quite impressive and effective. Cinematographer Matthew F. Leonetti needs a friggin' medal or something. The performances are also pretty stellar. Ralph Fiennes is tremendous as the sleazy, yet rather empathetic Lenny. As his close friend and bodyguard "Mace" Mason, Angela Bassett is amazing, and this is easily her at her most badass. Her performance is quite strong, and she pulls off the action scenes fairly believably, too. There's also Juliette Lewis as Faith, Michael Wincott as Philo Gant, and Tom Sizemore as an associate of Lenny's. Vincent D'Onofrio and William Fichtner also appear as two unhinged rogue cops. All of these people put in some decent work, and this film is another occasion for Lewis to show off her singing skills. Which brings me to the music. The score is decent, but the non-score soundtrack is where I was really pleased. There's tons of hip hop and heavy metal, and they perfectly complement the grungy/punk aesthetics of the world building, art direction, and set design. All in all, this is quite an amazing film. It's more than solid, though I will say that it does run on for perhaps a tad too long, and the basic plot, though decent, is unoriginal. I mean, as I mentioned, it's basically just a really dressed up murder mystery. It's still pretty great though, so I highly recommend it.

I think this really stands out as the greatest example of 90s mindset action/sci-fi. In look and story structure, it has all the elements of the time period crushed together into one extravaganza of gunfire and chaos. It's still funny how believable Ralph Fiennes is as a good guy, you'd just never expect it going in. You've also got Juliette Lewis walking around naked for pretty much the entire running time, so even if you don't like the movie there's a treat for you. One of its other standout contributors is the incredibly under-appreciated villain of the 90s, Michael Wincott. This movie really does have a lot to say about the future of society and pop culture, but it does so in a way that doesn't come off as heavy handed. While it has the shortcomings of being almost too 90s for its own good, the majority of this movie is just amazing. After seeing it a few times, even the not-so-lovable elements seem to disappear.

One of my all time favorite sci fi flicks. Fiennes is awesome in this role. This movie feels so much like a possible future.