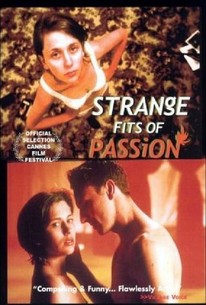 Sex and the singles scene is a much explored and exploited subject in cinema, particularly in the 1990's. Strange Fits of Passion tries to avoid clichés in narrating a young woman's desperate crusade to lose her virginity. The result is a bittersweet fable in which the protagonist takes the viewer along on her journey through hilarious sexual and social misadventures as she struggles to discover the meaning of sex, love, and desire in a world which is post-modern and post-everything. The first film of actress and stage director Elise McCredie, Strange Fits of Passion was chosen for the International Critics' Week at the 1999 Cannes Film Festival.

Michela Noonan
as She

Donni Frizzel
as Boy at Bar

Sim Gray
as Girl at Bar

Tom Healey
as Supermarket Man No. 1

James Wardlaw
as Supermarket Man No. 2

Paul Bongiovanni
as Nurse No. 1

Libby Stone
as Nurse No. 2

Jeremy Engelman
as Simon's Other Man

Constance Lansberg
as Charity in Soap Opera
View All

A familiar kind of story that never gets old in the retelling.

Writer-director Elise McCredie has cobbled together a scruffily ingratiating comedy that is enlivened by the attractively natural performances of her cast.

if you were missing gay suicides in the last decade or so, here's one good reason to catch this farrago.

There are no featured reviews for Strange Fits of Passion at this time.