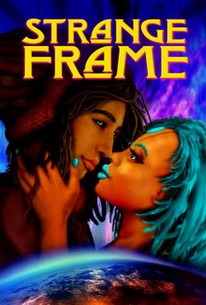 Two freedom-fighting lesbian musicians living on one of Jupiter's moons wage a valiant fight against the oppressive powers that be in this animated sci-fi musical set in the 28th Century, when humankind has fled planet Earth to make their home amongst the stars. Featuring the voices of Tim Curry, Michael Dorn, and George Takai.

A tolerance for Strange Frame's unique animation style is probably required for most viewers, but they'll discover a smart, characterful story about love, music, rebellion, and fascism, enthusiastically performed and one-of-a-kind.

An undeniably stylish and ambitious animated sci-fi film. The character animation is colorful but stiff and video game-like, which can be irritating, while the environments and backgrounds are often stunning.

In the 28th century, a sax player falls for a songwriter, then searches the moons of Jupiter for her after she hits it big and her manager forces the women apart. The Faustian music contract plot is cliched, but other than that this trippy animation has everything you could ever want in a psychedelic lesbian sci-fi musical.