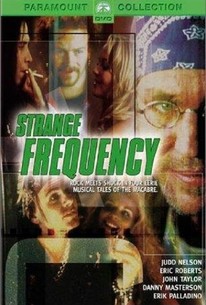 The Twilight Zone goes rock & roll in VH1's creepy anthology series Strange Frequency. In "Disco Inferno," metalheads Buck (Erik Palladino) and Randy (Danny Masterson) wander into a strange nightclub while looking for roadside assistance following a late-night car accident. "My Generation" finds a predatory hippie (Eric Roberts) facing an unexpected challenge when he picks up an unsuspecting "grunger," and in "Room Service," an ageing rocker with a penchant for trashing hotel rooms meets an unexpected nemesis in the form of a seemingly supernatural cleaning woman. Rounding out this frightful tales of rock & roll excess, "More Than a Feeling" offers the horrific tale of a famous promoter (Judd Nelson) whose unusual penchant for spotting up-and-coming talent ultimately has a deadly effect on his young prodigies.

There are no critic reviews yet for Strange Frequency. Keep checking Rotten Tomatoes for updates!

My Generation was fun, the rest were so-so.