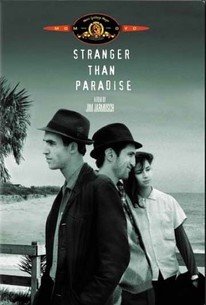 Critics Consensus: A striking debut for director Jim Jarmusch, Stranger than Paradise is an effortlessly cool exploration of finding meaning in the mundane.

Critics Consensus: A striking debut for director Jim Jarmusch, Stranger than Paradise is an effortlessly cool exploration of finding meaning in the mundane.

Critic Consensus: A striking debut for director Jim Jarmusch, Stranger than Paradise is an effortlessly cool exploration of finding meaning in the mundane.

Jim Jarmusch's Stranger Than Paradise is an odd, low-key comedy about trio of misfits--an everyday guy, his Hungarian female cousin, and his geeky best friend--who decide to take a road trip across the United States on the spur of the moment. Over the course of their voyage, they have both good and bad luck, meet a number of bizarre and interesting characters, and are frequently bored. Jarmusch tells his story very slowly and sardonically, which can alienate some viewers. However, those who want to meet him halfway will find Stranger Than Paradise an engaging and unique comedy, with a number of truly funny moments.

Rammellzee
as Man with Money

Sara Driver
as Girl with Hat

Critic Reviews for Stranger Than Paradise

Daring in its conception but made with a watchmaker's care, "Stranger Than Paradise" is a playfully eclectic, formally perfect gem. It is also a persistently funny film that owes as much to "The Honeymooners" as it does to the avant-garde.

Not a lot to it, certainly, but the acting and performances combine to produce an obliquely effective study of the effect of landscape upon emotion, and the wry, dry humour is often quite delicious.

Stranger Than Paradise is a treasure from one end to the other.

One of the most important indie achievements of '84.

Stranger Than Paradise captures what in retrospect turned out to be a last moment of unbranded American reality.

Its tale of two immigrant boys and a visiting Hungarian cousin tasting the trivia of freedom is clear-eyed, wistful and funny.

...a love-it-or-hate-it sort of endeavor.

It's a unique, indelible and hilarious film, and certainly one of the best of its era.

It's a hipster version of Marty.

Jarmusch constructs from basic ingredients a complex of narrative symmetry and existential ennui pointing to something far more resonant than the sum of its parts.

Audience Reviews for Stranger Than Paradise

Considering that I have ADHD, it's a wonder that I'm able to sit through films that are slow paced and sometimes devoid of plot. I can't make it through every film like this, but if there's things going on I like in a film like this, then yeah, I can get through it. This applies to this one here. In a way, I can sort of relate to the characters: they are bored, rootless, and don't really do much of anytihing, yet they are interesting people to watch, even if we don't really know much about them. The music, clothes, sets, and sparse conversations they have contribute to this. I found my self really hypnotized by this film. The performances are terrific, and if they weren't, then this film really would be a failure. Everything hinges on the understated nuanced acting the three leads (two of them being non actor musicians). The carmera work is also nice. I got so caught up in just looking at stuff that I almost forgot that virtually all of the film is made up of long takes. This is a nice little curiousity. I need to see more of Jarmusch's work before I can really comment on it, but, based on the others of his I've seen, this is not too far removed from his later stuff.

WIth minimal plot and cast, Jim Jarmusch creates a masterpiece on his first time out.

Stranger than Paradise can come off as shallow because it doesn't really say anything. There isn't enough dialogue that conducts to psychological profiles of the characters. There isn't a particularly great challenge or crisis they must face that can tell us anything about them that we haven't already seen. No. Still, this doesn't make the film shallow, it makes it like life itself: we don't know everything about people we meet or friends we've made, but they remain of interest to us for whichever reasons, among which is, quite simply, that they are real and we can relate to them. In Stranger than Paradise, Willie, his cousin Eva -just off the plane from Hungary-, and his friend Eddie, do and say very normal things in a limited space (the entire film is composed of one-shot scenes; zero camera movement), but their moments together are so well acted and written that they reach levels of intimacy very close to real life. I suppose that's what has given this film as many lovers as detractors; how you experience it has a lot to do with your own perception of day-to-day existence.

Willie and Eddie live in New York, they want to get rich, which is why they're always gambling or something, and when they aren't excited about betting, happy about winning or sad about losing, they drink beer in silence and sit in an ennui they don't quite comprehend. A feeling of insatisfaction and desire for change envelops the entire "plot". One day, Willie's cousin Eva, from Hungary, arrives at NYC and stays with him for a few days before going to live with their aunt in Cleveland. Initially she is quite the nuisance, but her being a brand new element in an otherwise old and bleak panorama entices Willie and Eddie's interest. A year later they decide to embark on a road trip to visit her, and then decide to escape the Cleveland winter and drive with her down to Florida.

Cinematically, roadtrips always go hand in hand with change, realizations, etc. Stranger than Paradise doesn't follow exactly along those lines, although it reaches an ending between tragic and hilarious that definitely involves change. It is a very unique film in that it goes nowhere; even locations as different as New York and Florida, filmed in stark black and white, "seem the same".

The 'meaning' behind it is unclear, although I wonder, MUST it have a meaning? Can't it just be like a photograph or an entry in someone's diary, a recollection of the truth as it is, of the moment as it happened, and nothing else? With that in mind, Stranger than Paradise is engrossing. It has laugh out loud moments and angering displays of human stubborness and stupidity. It's dark, slow, and honest. Willie, Eva and Eddie are played by very talented, charismatic actors who could be out of a new wave film, if they weren't so distinctly American (except for Eva maybe), although I can't quite explain why. This movie is undoubtedly American, infused with its culture, but the filmmaking style is far from the usual in American cinema (although Jarmusch does owe Cassavetes plenty, I know he was not American but his films are landmarks of independent film made in America). Jarmusch may have progressed towards the more 'standard' indie style that predominates today, but this is testament to his capacity and originality, and my personal favorite among his works.

I think as weird as it may sound that I appreciate this movie more than like it. I think that some of the scenes are really great, but there are some that drag the movie down for me. All of the scenes are beautifully shot and acted. John Lurie is fucking awesome. I really enjoyed Broken Flowers and Cigarettes and Coffee, but there are some scenes in this film that just made me bored. Like I said, I appreciate how he made it, but that doesn't mean that it's all good.