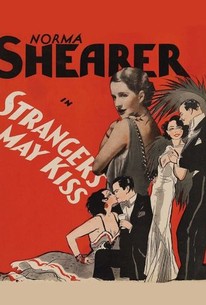 In this romantic melodrama, a young woman travels to the ends of the earth to be with the newspaper correspondent she loves. She trails him to Mexico, but once there, he leaves her and heads to China on a new assignment. The woman is heartbroken and so heads for Europe where she embarks upon a series of meaningless affairs. Eventually she tires of roaming and goes home to reluctantly marry the man who has loved her since childhood. Fortunately, just before she marries, the reporter finally reappears and proposes. Unfortunately, when he learns that she has had many affairs he spurns her and the woman begins planning to kill herself. In the end, her reporter forgives her and happiness ensues. The story is based on a novel by Ursula Parrott (in the book, the woman does kill herself, by the way).

Ray Milland
as Admirer
View All

Critic Reviews for Strangers May Kiss

There are no critic reviews yet for Strangers May Kiss. Keep checking Rotten Tomatoes for updates!

Audience Reviews for Strangers May Kiss

Poor Robert Montgomery, always in love with women who don't love him and are seeing married men. I've watched 2 of these in a row - this one and When Ladies Meet. Good movies along the same theme.